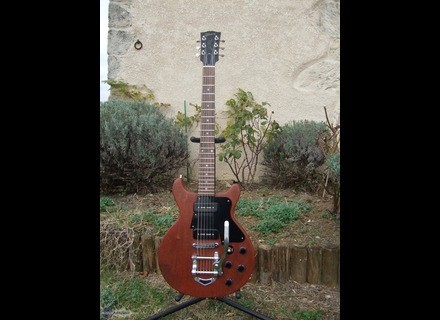 Gibson Les Paul Doublecut P-90
4
The Double Cuts were never really poplar, and considering how they look and feel, it's not really a surprise. This is a double cut, but it also had P90s and a trem equipped on it for extra versatility. The guitar features a mahogany body, a mahogany neck with a rosewood fretboard, 22 frets, dot inlays, pickguard, no binding, trem equipped bridge, two P90s, two volumes, two tones and a three way switch.

The guitar had a few issues with it, but they weren't major. The biggest issue that was a problem was that the nut needed to be redone. The nut was worn quite a bit on this, and instead of building it up, I would just replace it with a brand new bone nut. It would help revive this guitar and fix any tuning issues that were occurring. The frets were in pretty good condition for their age. The finish had a few nicks and dings, but nothing major. I'm actually not a fan of the bridge that was put on this as I feel my hand is always at a weird angle, and it doesn't stay in tune like other bridges out there.

The Double Cuts can sometimes remind me of a more airy sounding Studio sometimes. The guitar itself is resonant, but i find that they sometimes lack the balls that the regular Les Paul has for whatever reason. The pickups in this were pretty average. i was never a huge fan of Gibson pickups, so keep that in mind. The bridge is decent for that rock kinda vibe, but it seemed to struggle once you added quite a bit of gain. The neck was a bit bright, so I found myself reaching for the tone knob. I'm not actually a fan of tone knobs as I have to constantly fiddle with it when switching between sounds. All in all, fairly average.

The double cut Gibsons are definitely an acquired taste. They're not the prettiest thing that Gibson has ever made, but they're far from the ugliest thing. They sound pretty good, but be sure you check out a few before deciding on which one to buy as there are a few dogs out there.
Did you find this review helpful?yesno
»