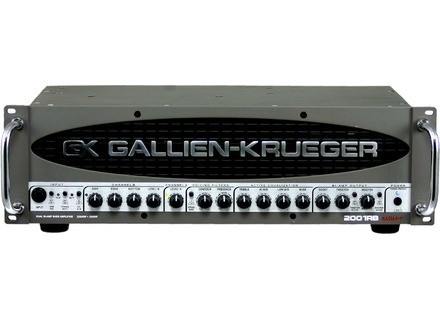 Horobi's review (This content has been automatically translated from French)

Gallien Krueger 2001RB
5
Head transistors 2x540W (2 Ohm), 1080W bridged into 4 ohms. The head also has a 2x50W for the tweeters, which only works with the cons by speakers Gallien Krueger adapted. The connectivity of these is via the Speakon 4 drivers supplied with the head. The bb is 19 "x3U and PSE approximately 20kg

Also contained within the package by the footswitch (to switch between two channels, get in tuner mute or disconnect the tweeters if we use the Bi-amp), jacks for chaining mode and Trigg.
The footswitch is connected via a 5-pin DIN cable supplied as well.

The Pramper has two channels, one clean with a single volume, and a distortion channel with gain, bass, treble and level. A-14dB pad (required for active basses) is presents, with cots are the switches horn mute and tuner mute (footswitch disables if the branch is. Equa level is a four Gnrale 4 bands; plus contour, presence and voicing (std or low tuning)
There is, for the power amp, a volume control of the woofers and tweeters, with two hi-cut spars (if bi-amp is not used, only the controls woofer account ), and a signal post preamp boost.

A table of Impedance is minimum even on the back of the amp, the dream for not crashing.

I think nothing forgotten and I think I t quickly.

Despite a facade busy, rglages are intuitively, even if it is even recommended in many of the travel manual. The latter, as quite clear and specific on, specific on when the possibilities of advanced features (chaining, trigging, bi-amp ...)
Rside the problem in the fact to wire the head and use the dual amp and bi-amp (for example, we can not use Speakon bridge head on this thing ... shows in the manual.)

Mtal playing mainly on two stingrays (a 4 and 5), the clean sound with rglages noon is clean, Fidler instrument. It is quite low gav naturally, but is warm enough for the transistor. The four, after fiddling with the contour and presence, is very effective and can have very large posibilities: gav dub sound in the low, medium well its punk with a single coil, well dug his slappy ...
The head shows his versatility on this channel very very clean. A good compressor downstream does not DNote but my sense is not nessessaire (AC dpend of each game ... APRS)

Overdrive channel is standard. it is a clean but powerful enough fuzz. It can be used to effect Lger, dirty, or carrment a violent distortion. Despite the color gives the sound and near who agree reasonably well, we keep the grain of the bass through. It goes perfectly with Wah, before, or after the Pramper.

The cabinet falls greatly into account, but on a SVT810E is happiness. Configs with 10 "and 12" will welcome a 15 "will not may be more suited as a given that the head is basically provided at low (I have tried on 115 410 is much less than a Dfine 810, rglages identical, and the gain in low frquences is not obvious.)

Me I did not test the bi-amp, but nothing to unplug the tweeter on one baffle classic, I find it very useful ... Slappers and soloist will find other may be employed.

I used beginners since January, and I had the time to grind in RPET and in concert. Habitu the Little Mark II and Peavey Tmax (heads of transistor well but not great), I'm Entirely satisfied with this head, and I recommend it. The fuzz is DEFINITIONS rock but can clean all the tapper in style.
It may lack the cachet of an ampeg sound that we recognize aisment, but it offers power and Fidler. It's a head UNESCORecords with a big sound.
The only problem (which is not one for me but may be teachers) is its transparency. Plug in a shovel and the result will bof. This is the problem of all the heads a bit Stereo, but it keeps a cot warmer, more rock ...