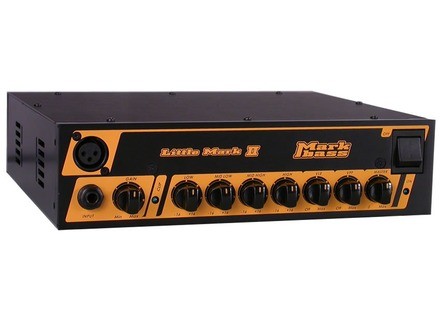 Markbass Little Mark II
4
It's a medium power, very compact head, and since I play small venues most of the time, I often use a small MarkBass 2x6 combo. I play in a duo and in a string band, and neither context includes a drummer nor a jerkoff geetard, so I seldom need big power. WhenI do, it's not my bandmates but the room/venue/audience that is the problem.

Once again, an item from a clearance at the local GC. Hard to figger the actual cost what with the trade-in, the coupons, etc. It was somewhere around $500. I had played it in the store a few times. Mainly, I thought of it as a more powerful version of my small MB combo. This head also provides EQ, which the 2x6 combo does not [the 2x6 gets by on just the two mb tone filters.]

The best thing about it is the pair of MB tone filters, the VPF and especially the VLE [vintage loudspeaker emulation]. Along with very reasonable size and weight, these filters are the main deal about MarkBass products.

I also like the 4-band EQ. It has well-chosen frequencies for most of what I play.

It has a fan that runs all the time. It's not a tube amp, nor a trnansformerless amp, so I don't know why it hasta be that way.

There's only one speaker-out jack.

Seems well built for this type of amp. It has those black plastic 1/4' jacks which can be trouble, but most amps these days have those, so that's not a particularly MarkBass-specific complaint.

It's all about the VPF and VLE filters.

I can't rate this a '5', not with the silly FX loop, and only one speaker jack. The fan I could forgive, as thaz getting to be pretty common on lotsa gear now.

Markbass Little Mark II
4
This is a solid state bass amp the delivers 600 watts of power and only weighs about 4 pounds! There is one input for the bass, an output for a tuner, two speaker outputs, and parametric EQ with low and high mids, plus a tube amp simulator knob and mid sweep. There is also a low impedence direct output on the back, so there is no need for a DI.

There is a very simple configuration on this amp, which is just what I needed. It's easy to get a variety of sounds from the amp - it's very versatile. I did not receive a manual with the amp when I purchased from Guitar Center, but there is information available on the web site.

I have used this amplifier on a variety of jobs, including rock, jazz, blues, and funk. It always comes through for me, with appropriate tones. I used a Schecter Diamond series for the most part, and I get a great slap and pop tone, but can also dial in a warmer tone for blues and jazz gigs. I keep the mid sweep and tube amp simulator knobs turned all the way down for the slap sound, with the bass turned up a little more than a quarter of the way. The one gripe that I have is that the direct output seems to color the sound a bit when sent to a PA board - it appears to add Mids to the sound.

I really like this amplifier, and I have noticed that there are more bass players in my area (Pittsburgh) who are using it. It did take some time for me to find the tone that I was looking for, but that is probably because there are so many tone options that are available through such a simple design. At about four pounds in weight, it is a dream for working bass player, especially those of us who used only heavy tube amps in the past! I still love the sound of tubes, but this amp can be as warm as you want it to be! I definitely recommend it – I have been using it for almost two years now, and never had any problems, which wasn’t always the case with my old tube amps! At around $600 from Guitar Center, I think it’s a great buy.

Yes!
Gets it easy to sound good?

Yeeeees!
Is the manual clear and sufficient? ...dropoff Window

Is it your style of music?

It should all styles of music; bluff by the versatility!
With what (s) guitar (s) / low (s) or effect (s) do you play?

Fender precision; my grain is preserved!

anything is possible with!
I was afraid of losing the grain of my bass and my speakers, ba not. I rconcili with markbass.
Superb sound presence.

everything is good to take

1 week
What is the particular feature you like best and least?

super honest, I la'a Gd 400 secondhand, it is found 609 new; them is hands down!
With experience, you do again this choice? ...dropoff Window

Now yes! if one day I sold the louse changes; ventuellemnt against an eden electronics and again I am the combl.
Did you find this review helpful?yesno
»

Very easy to use. We can do without the manual.
The frequency settings are effective. I do not like the VLE and VPF filters. I've never utilisés.Ils sound too artificial and detrimental to sound quality, in my opinion ... This is subjective.
For me, this is an amp considered neutral, it is not wrong, but still produces a "flattering" sound ... It is far from transparent antique SWR or EBS for example.

He can walk in many musical styles. I played metal by using it. Mostly I play with all the knobs at noon, unless serious I tend to decrease the amp and turning the VLE and VPF filters.
Connected to a 4x10 cab Trace Elliot (old model so 320 watts / 8 ohms) with a Fender JB V passive Us, you can have a satisfying sound, almost natural, well balanced and full ... but it is not accuracy and clarity of other more expensive brands ... I think we should turn serious but it depends on your instrument and speaker used ...

Used for 2 years.
The volume is not insane .. Watts announced are overrated in my opinion .. I tested EBS Reidmar which real 250 watts into 8 ohms and 300 watts buries the Markbass.De Similarly, the Orange Terror Bass 500 is significantly more powerful than the LM II

Overall, a good amp, well above an Ampeg SVT III pro I've tried ... The quality / price ratio used LM II is interesting .. and I do not see the point to acquire LM III .. However, in the same price range and stay in class D, or the EBS Reidmar Aguilar TH 350 seem higher.

Did you find this review helpful?yesno
»
Read the 16 user reviews on the Markbass Little Mark II »