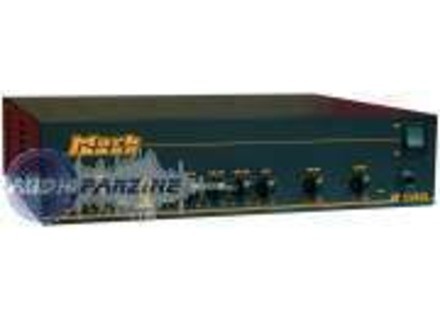 fbrasil4's review (This content has been automatically translated from French)

January 14, 2010
I took some time to find my sound, lack of experience, the more I played on a 5 string jazz bass deluxe U.S., not easy to master the beast .... in short I finally found: the rock sound Markbass
very nice: powerful, with the grain type, but just enough. (Ampeg you plug you already have a rock sound, with markbass not so simple, for against it's worth it to dwell on it, because with a good bass sound worked well, slap finger ... we get a particular rock sound unique and friendly ... (hard to explain going to try it ... lol )....

I play with a jazz bass deluxe U.S. 5, I am in a group with bassist brass. It combines several styles of sound as ska, jazz, rock, funk, metal and sometimes ... that's why I chose this head.
I wanted to keep a neutral sound (markbass to let him speak the jazz bass) and I also need a small rock next to a grain of light, which is my choice as directed on the head with markbass.

The sound is as thin as your finger slap in the amp just makes us all what he is given accurately.
Lots of opportunity despite the apparent simplicity of this amp settings.

January 14, 2010
This head allows me to color my sound without excess, like that I can be discreet grooves on the brass and I can intrude on the parties slap rock ...

I bought this amp a week ago, I have not had a chance to really test it live, I fell in love with this head for ease of use, sponsor, and especially jazz side rock. With a mixture preamp very clear and original, a slight coloration of the sound of the bass.
I tried an svt 3 pro ampeg from home, this does not suit me, the sound was too typed for my taste. I had ashdown amps, swr, I played live on the Ampeg, Hartke, Trace Elliot, Fender. I prefer my current sound.
I use it with a body of 410 HLF Ampeg in order to have made it rock (that is the focus of my group), but I know for jazz and all styles Groove as funk, reagge ... it can be used with a body markbass.

Very good value for money, even if it is necessary to break the bank.

January 14, 2010
I have worked extensively with the group my sound, I found my happy, I can get a rock sound grumpy. (May be due to play on 410 HLF Ampeg, trying on baffles markbass classic)
It's been a year and a half that I use this head, never pb, I will soon change the lamp ...
This choice I would do without hesitation is said to markbass that they are very good head for jazz, rock But they made hard with the R500.
The sound is really interesting rock markbass working. I'm still not gone into the studio with ... it would delay
PS: Take the R500 VLE add a filter and a tube for the drive ..... and you will rock the very ...
The Little Rock just released .... 500 .... pffiu