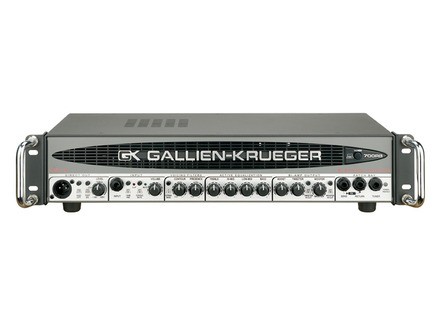 The Gallien Krueger bass heads have been a staple of the rock and roll club backline circuit for years. They are loud, clean and realiable.

I was interested in the 700RB-II because it was a new and improved take on a classic amplifier. It normally costs $600. I bought mine used and have not had any issues with it.

This amp puts out 480 watts at 4 ohms with an additional 50 watt high frequency output. It works like a crossover. The setup really shines with my Hartke 1 15' XL cab and a home made 2 10' speaker cab with EV speakers. Loud and clear highs and thumpin lows.

The DI out makes things easy when gigging as all I need from a soundman is an XLR cable.

The 4 band EQ rocks. GK does the hi and low midrange knobs which is a nice option.

I have this mounted safely in a 2 space SKB rack. I have read these over heat. I have not had this trouble, but just a warning to be smart. You can purchase a small fan for a couple bucks and mount it on the back of your rack.

There is a reason why Gallien Krueger amps have been around for years in rock clubs. Great, no fuss work horses.

The grip is very simple and effective action and allows knobs sooooo adjust the sound millimétré.Vu the number of knobs and finesse of their action must fiddle around a bit to find his sound, but the advantage is shot versatility. In any case it already sounds very flat.

The spirit of this head is quite modern, ie it respects the instrument is connected to, without crushing grain in a too pronounced. The action of the fine equalizer allows versatility and beautiful if you add the two filters and outline presence and action settings separate woofer and tweeter in bi-amplification, impossible not to find a sound that suits the situation. The bass is deep and warm, a little fat depending on the setting, always very well defined even on drops. The action of the boost knob and the ability to push the woofer without saturating the tweeter provides the famous growl gallien. The mids and highs are crystalline and contribute to the modern side, if not appreciate, cut frequencies and warmed her through the boost without reaching a vintage sound, we approach (but difficult to obtain its felted or a little grainy, it's still very straight and clean. sorry I could not make cruncher, even pushing the boost settings. explosive without sound is punchy. well my cash It effects (fuzz , overdrive, envelope filter). I play in a cover band stoner metal, alternative rock and lends itself easily to all these exercises, I practice from time to time in a more funk and it sounds great too. metal in the registry accurate and furious his side gives him the advantage over my head markbass 500. (IDeMS on pieces droppés or lower are defined)

I use it for more than 2 years and no complaints, level growl I have not found the equivalent. I do not like the right side of the high mids, treble (I prefer the ones in my head makbass 500, felted less aggressive.) But by cutting certain frequencies there is a way to erase this specificity. A great amp, versatile, efficient, solid as a rock, very good value for money. Despite evidence of the purchase of the head, it's still there ...

Gallien Krueger 700RB-II
5
Transistor amp head
View previous opinions or https://www.gallien-krueger.com/products/rb-heads/ for detailed specifications.
The 320W @ 8Ohms / 480W @ 4Ohms are more than sufficient for the vast majority of situations, I have only very rarely need to push more than half.
The DI output is good (used several times for recording, and often live), its adjustable output level is a plus.
It is regrettable available output jack of the loop and tuner on the front of the amp: it requires to run cables from the front, which is rather annoying when the head is rackée.
One of the most interesting knobs is the "boost", which I will discuss later.
The bi-amp is interesting, but it is not génialissime: it allows to dose more or less the volume of the signal sent to the tweeter or woofer independently. Very useful to reduce slamming and make his heavy, or do just the opposite.

With a single channel, the configuration of the head is very simple. The manual is very clear on this subject.

I use this amp mainly with a Warwick Vampyre SN, and leaving a flat EQ sound is already more than adequate.
The Boost knob I mentioned above is in several ways: as its name suggests, augment the overall signal level, but also adding grain, "GK growl" as they call it, which simulates somehow lamps amplification attacks. The effect is given a slight overdrive, very pleasant to the ear and beautifully suited to its already aggressive my bass.
Leaving this knob to zero, it remains more of a knob EQ standard presence and contour all more effective than others. You can get almost anything you want as sounds.
For information, I plug in the head two speakers of the same brand, the 115 and 410 Series RBH. Often only on the 410.
After having long Sansamp GT2 added to obtain a large saturation, I went on a Sansamp RBI, but not long enough to describe efficiency.

I use this head for 3 or 4 years, I tried several models from other brands but it is the strength of this that convinced me. I have not tried any other existing brands, but it suits me and I have as yet no reason to change.
The price / quality ratio is excellent for well under € 1000 was a head of power reassuring offering a wide range of sounds. Certainly I would do this choice without hesitation, although I would also feel the new series in GK Fusion.
I find, however, a pity that the dual channel only available on the 2001 model RB, which costs an arm and spit twice Watts.

jhorloger's review (This content has been automatically translated from French)

Trs easy to use, the fat to touch a knob changes the sound with great precision.
The good sound is very easy to find.
The manual is clear, but TRS in English.

The sound is absolutely gnial dynamics is really good one can vary the sound as you want so it is easy to use and prcis.
I have a trs fat as you can have a trs his lens.

I love it all. C the sound I wanted, dynamic adjustable wish.
I tried with difrent speakers (yes I did not even me) as Hartke, Berhinger, Hartke, Genz Benz. Best with Genz benz c then c the Berhinger, and I really cashing them tonn t serious as I have rarely seen on cabinets that price. I play the same and the sound is not dnatur. And the lowest c Hartke. With this head we see the limitations of speakers such as Hartke (VX and TP) that are really bad quality.
C head really exceptional. Just one last point, I find the sound that's closer to the EBS.

Did you find this review helpful?yesno
»
Read the 5 user reviews on the Gallien Krueger 700RB-II »