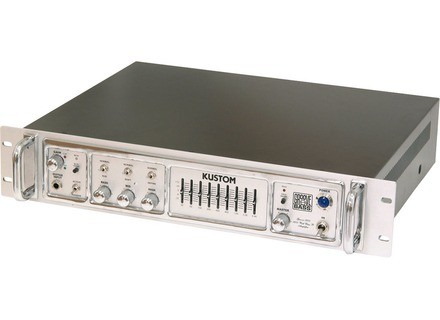 CheanFilipp's review (This content has been automatically translated from French)

The setup is a little complicated for a novice. But after playing a dozen hours ptite above, we understand well the basics and even some small subtleties.

We obtain easily the sound you want with all these settings. Besides, I would say the sound is just huge, and we can do what we want. A good round but its precise or to snapping slapper or just for certain songs where it is better to have it.

That said I put 8 because English manual and bulk. The head alone is ok, but with the housing ... we can easily reach 80kg, when we know it today is that the amps are 600W 6kg and issue ...

I'm really kind of music, it goes on to muse beatles via phone or Shivaree, with short bursts of ska-p and elvis. Even traditional French music, German and Alsatian. Occasionally, some korn or other in form. This amp is awesome for its reliability and above all it versatility. Not to mention the power!

I play it with an Ibanez K5 (signature Korn) that is active is that really makes this amp a cerebral ejaculation.

On this amp, I prefer to have a set in V and have a sound that is round, but precise, increasing the gain maximum, but with little volume.

I have been using mtn 3 months, and apart from the weight, I see nothing wrong with this amp. I could compare it to a Hartke, and despite the possibility of cutting off the equalizer on the latter, the Kustom is really nicer.

The value for money, I can not judge him because I found a website, or is it really good place to do business, and I could buy the set 500 instead of € € 1500.

Again, I would not change that for something lighter, but with the same capacity.