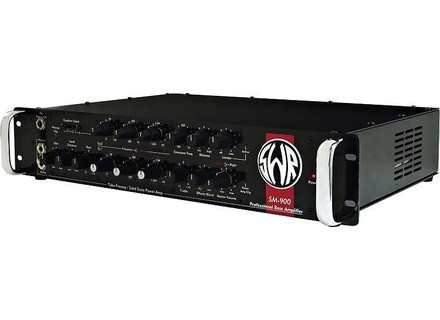 skizodeadman's review (This content has been automatically translated from French)

Setup not so simple by the number of possibilities to adjust, connections, etc. .... As long as you have the manual in French (and again) ca is no longer a problem.
It easily gets a good sound .... but we get the sound you desire after many trifouillages.C is so complete and so accurate that we can afford to be demanding as long as the they 'give time.
The manual is findable on the net in French for the recent version (mine is an older version, which was nothing less than the new, however mine is equipped with a crossover very useful).
I put 9 just because it's quite complicated to find the sound you are looking and because there is no graphic equalizer (which is not a fault per se, just that ca would have been fine)

In group I play modern Thrash mtal and I think it should edge (you do not have to play on Ampeg to make non-metal but oh!). Branch on Config 1'15 +2 10 SWR Pro Series I the spectrum is admirably rendu.En I play solo jazz and rather as the fact ca square is precise, direct it, it sounds!
I play it with a Warwick Thumb bass NT, which allows me to have many acute slamming, the sound of strings does not stain the contrary, it confirms the particular style of sound did not basse.Je necessarily its "bold" like the Ampeg sound here is very accurate, respectful of what he sends so everything depends on what he branch.
I prefer the sounds are simply the sound of my bass, ca growler well when we play doigts.En slap, a very percussive sound of taps and shooting well, but not necessarily super slammin aggressive
I hate the sounds: RAS

I use it for 8 months
The particular feature which I prefer: respect for the sound of the instrument, power, SWR logo ^ ^
The one I like least: its hard to have a disgusting, which is in fact a certain quality (and me)
Before buying it I was on Ampeg, the sound was too soft, and above all, lack of power.

I do it again this choice without hesitation, OCCAZ (too expensive in nine)