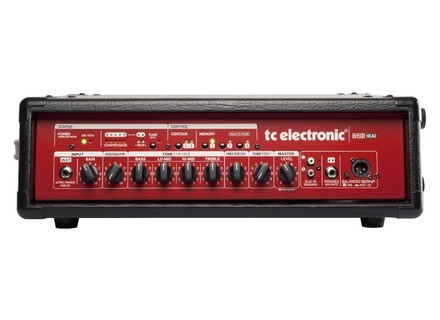 All user reviews for the TC Electronic BH500

Average Score:4.5( 4.5/5 based on 4 reviews )
Not satisfied with those reviews?
Our members also liked:
Editorial review
Users reviews

.allan147's review (This content has been automatically translated from French)

the manual is very clear, a startup must, before opening the volume adjust the "gain" on Impedence bass (small green diodes) and after .... hello its exellent amp recommend (quality-price ratio)

deep purple to pink-floyd (a relatively clean sound has a "fat" sound it makes very good job the "tube tone" effect gives an amp lamps not stitched to ....

week, I 'tried Ampeg Portaflex 500' returned after 2 days, 700 Ampeg svt pro 'returned after one day
Did you find this review helpful?yesno

I struggled to find a satisfying sound but it is effective. Do not hesitate to get the Twetter Tone 1 hour.

I use it with a Spector Euro 4LX low it suits my style rock-funk. The sound is precise, clear.

I use it for 2 weeks actually ... replacing a combo Ashdown Evo II MAg300. I like the ability to store sounds, tuner emulation lamp, DI Pre and post, weight and power also.
However I am disappointed by between AUX-IN. I thought I could swing of playbacks for example with a mp3 to be able to repeat over ... It is possible but only with headphones! I do not understand why!
Too bad he did not either footswitch.

cedrelek's review (This content has been automatically translated from French)

TC Electronic BH500
5
Remember:
- Multi-band compressor truly effective, it changes the compressors that are only limiters and have utility for protecting the HP.
- Simulator lamp pre AND post, very effective. It moves from its "flat" and very punchy until the saturation of the lamps.
- Tweeter tone that works effectively on the tweeters.
- Built-in tuner. This is the first amp that I have with this feature, and it's too cool!
- 500W !!!!! It's enough to make a fool drummer (well, basically they are not already a bit?: P)

I does not 10/10 because I had to open it and solder a little to make me a footswitch to control the presets ... I think they have abused this point, it cost very little welds 6 ....

The manual is clear and sufficient?
No need

Do you get a good sound easy?
Despite my remarks above, I would say that yes, putting everything in the middle, the sound is already very good.

It fit your style of music?
To rock, not violent, but not quiet either, it's perfect.

What kind of sound you get and with what settings ("crystalline", "fat ",....)?
Depending on the setting. You can have the lens but the head is cut out for the big fat heavy sound with a dynamic and impressive.

Warwick Corvette Double Buck (2 humbucker in assets) .... So I always had a sound of the thigh.

For how long have you been using it?
since it came out on the market.

Did you try many other models before getting this one?
I also have a Peavey TNT 115, well, this is not comparable, it is not the same category.
I play on a ampeg svt in repeat ... that's fine, but after it is a matter of taste, I still have not found the sound on this amp suits me, the only thing I found is to dig my sound (mean the grave, there are notes, but any lower would have the same result)

What thing do you like most/least about it?
The +: simulator lamp
The -: no footswitch

What is your opinion about the value for the price?
According to my dealer, he had no return and recommend this head / brand (relative to the Ashdown for example). A similar price, it will in all cases less.

Knowing what you know now, would you make the same choice?
Yes!

I took this head on hand without the fuss (it is beautiful!). More seriously, the book I was not necessaire.C is clear, intuitive, access is direct, no menus and submenus to settle something, despite the many possibilities of the device. We branch and play.

The controls are super efficient, the sound is neutral and respects the identity of the instrument. I perceive as soon as I replug my Ampeg B2R! With the BH500, we pass a rock very heavy and greasy, has the old (going low in passive tweetertone is cut, we add a touch of Tubetone and adjusted his low, mid, etc ... ) has a very hollow sound slap (pressing the button outline contour type-2-pro, it compresses a bit hop is the trick!) in 2 seconds! And we all memorized it like a good old car, pressing up on the 3 flashing diponibles.Simple presets, fast and flexible. One can even say 4 presets, press again for the current preset, there is the sound of what you have in visual setting (the famous "What You See Is What You Get"). In addition we feel that this amp was in the belly. It's dynamic, CA pushes really hard and it produces very infra puissantes.Peut even be too much for my poor speakers 200W each conceding that ... But unless the knobs are typed Fender (a substantive level 3 and nothing beyond ...), I play on 3-4 in repeated and it is already enough!

I recently got tested already intesive possibilities of the beast. I've had amps neutral (like a Hartke HA3500) and a very distinctive amp (Ampeg B2R). I have tried other amps here and there.
What seduced me, without having tried it:
Reputation-TC electronic
It's all in one solution (tuner, overdrive, presets, connectors, although it lacks some things (I will return below), and the price (thank you China ...)
This confirms my choice:
-The sound palette
-Dynamics
It is easy to handle
-The intelligent design (the volume of DI is independent of master.On can save on your PC, the speakers connected, the master has 0 and yet the signal is coming convenablement.Pas case on my Ampeg ...)
What bothers me:
HP single-output, Speakon in surcroit.Faut still buy a cable ...
-Not to manage presets pedalboard or disto
No-connection as an output to power amp or preamp input or effects loop. Even if I do not use all this ... The good thing is that the connections are all facade !

To summarize, this head has a very good price / performance (to see over time for reliability), with embedded solutions which avoids the 40 pedals and alims necessary, whether for registration, repeated, or Work at home. So she can claim the title beast scene, it lacks a pedalboard for managing presets live. But if it does not change its current chip, it makes the case.

For that I use, I do it again this choice without hesitation. This is the kind of product I expected!