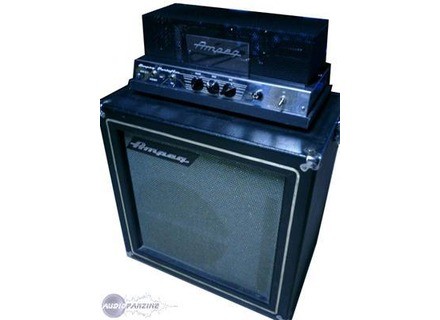 Jouerdelababasse's review (This content has been automatically translated from French)" Great amp!"

Ampeg SB12 Portaflex
All-tube amp, December 2 AX7 preamp, two in 7868 and one ar4 power rectifier, all delivering 23 watts (FYI the first B15 ISSUE 25 watts).
No connection for additional hp on mine, it is a model 1966. The 12-inch HP connects via the latches on both sides of the head. Three knobs, volume treble bass, an instrument input, low input.

Ultra simple setup, plug it up the volume and go. I use it a lot at home and just by repeating.

I connect over a jazz bass and a 69 pbass Warmoth, the sound is deadly, hard to get a bad sound. I use mine with a 15 cab markbass more tweeter 8 ohms connected with crocodile clips on the outputs of the head because there is no additional output hp (taking care not to lock latches connection the original 12 hp). Powerful enough to play normal volume group amp, 23 watts are well along with the 15. The sound is very deep, well-defined thanks to the tweeter with very warm mids.

I've had a year soon, I also have a little tete markbass mark. This is a great amp, perfect for pop, rock not too edgy, the acoustic, anything that does not require too much power, quite versatile with a good bass.
It also works well with a guitar using genuine HP. I never revendrais I tried a lot of amps, Markbass cmd 151p, ampeg b2, peavey tko tnt, Hartke, trace, etc., this is the best by far (for me). A must.
What I like most: everything.
What I like least: no connection for hp ext.
Did you find this review helpful?yesno
»