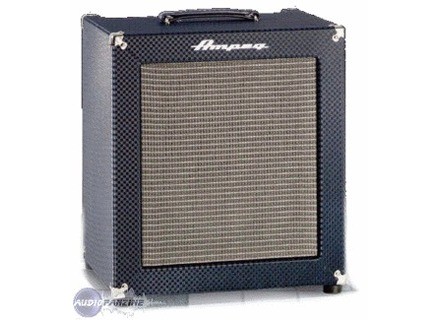 All user reviews for the Ampeg B-100R

Ampeg B-100R
4
Daddys Junky Music. It was about $400 in
2000 or 2001. I bought it because every
time I shopped for a Bass ax at Daddys the
ax sounded better in the store than when I
got it home. I realized I almost always
plugged into the B100R at Daddys, meaning
the sound was more dependant on that amp
than on which axes I bought
Did you find this review helpful?yesno

I play metal but I just tate all the styles I play with a Cort NB4 LH is a great sounding amp is neutral but has a grain Ampeg supper that can be found in all lamps ( I said a supper) but for a transistor is crazy love everything about this amp apart from the aesthetic in the early days. The little trick is to push the master 8, no prs, and the sound is present.
The only problem is the power and yet there is in 200w.

I use it for six months, I will not let go, I love it. I love the sound and as I said in a gene metalheads external appearance a bit, but it is fast because the sound is l.
While the list will begin before you buy I try everything ampeg BA115 (the twiter too noisy) fender (too high), Hartke (without soul and yet I have one), Hughes and Kettner (bof ), Carvin, Laney, Berhinger, trace elliot .... I just have not found my sound is all, but I respect the other brands if everything jous bassists on the same brand, be sad. Then the ratio quality price is really not good I have bought 370euros (stroke of luck), but otherwise I took Hartke but the quality is there no doubt because I see him do all the colors and we need to do saturate.
If I had not had this opportunity, 'I will not get it made, even when it's nine 900euros is not nothing.
Did you find this review helpful?yesno

kartissue's review (This content has been automatically translated from French)

This is not a pilot station making it easier to grip. Basically a good combo amp-speaker of the neutral and no frills.
Only inconvniant notable WEIGHT ... gloups ...

It goes for any style I think, as a given that I use in Varita-musette and my poor bass player uses it to the Rock-metal. What you ask for?
Knowing that the two are a low utiliss De Armond active and Ibanez Ergodyne.
Although the sound worked out great.
I do not use the boost, however, because they do not seem very useful.

I bought it in 2004 trs OCCAZ a good price which makes the male / amp. Cheaper it is, the less wrinkles with its hardware.
Trs good in RPET as scne condition of being included of course.
Previous the bass amp I was using (in prt) was a Roland Cube 60W. Adaptation to the LSE was difficult knowing that both have their own personality.
It turns out that considering the price I bought it, and given the life I think I'll do is a good investment trs trs.
Did you find this review helpful?yesno
Cookies help us improve performance, enhance user experience and deliver our services. By using our services, you agree to our use of cookies. Find out more.