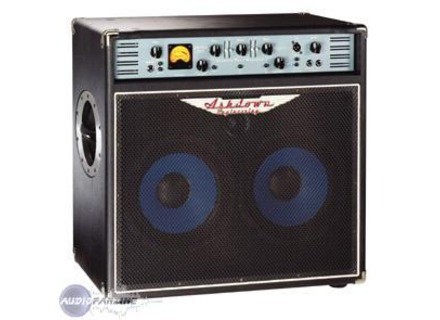 gridoul's review (This content has been automatically translated from French)

Despite the simplicity possibilits.on gets all his veut.le that drive you into the big leagues and become the great porte.le its REALLY great.

For all its musiques.le trs dish is hot, can profond.manque can be a treble, but is easily corrected without turning the bottom rglages. (Rglages super prcis) . is one of the best in its price class.

I do not own but I play regulirement in a store with a keyboard
and sometimes a lot of low batteur.avec diffrentes.il to mix well with other instrument.probablement my next achat.le price is justified given the qualitbr /> and its finition.un top! try if you want to invest in the long term.
EDEN store cot. nothing!
available in 15 inch, 4x10, spare head, etc ...
Did you find this review helpful?yesno
»

Ashdown C210T-300 EVO II Combo
4
transistor amplifier: 300W into 8 ohms (Hail a cab and more ...)
The amp itself should give ... I do not know me in the 200W
connection:
-Passive and active inputs
DI / O (that is what it's worth)
-entrée/sortie effects loop,
-Output jack (or phone line)
settings:
-Volume "input" (gain)
-5 Knobs Equalizer
-One button "bright"
- "" "Deep"
- "" In / out eq
A button-in / out compressor and a knob compressor
-A "" "subharmonic" his knob
Volume-General
-A vintage style VU meter that indicates the level of input.

pretty good although it could be even simpler.

Yes, it's simple but it must go around and it still takes a little time.
the meter, that's great!
As well vsoleil board (I think that's him) is to the top of its volume into nag on bass and watching the meter, then goes up and it was a sound that makes us no surprises.
Clean the rest at first you do not really know how to deal with its buttons "bright" and so on.
For me it quickly: all these buttons (bright, deep, sub thingy) it is useless to me if I am serious, I go up the bass, treble if I want I rises. I do not see much interest from the buttons ...
However the Equal is great: 5 pots and I did everything with it to the ball!
the sub-harmonic that it makes me laugh. it's just a octaver not finished. Like I wonder what he doing there. It is good to confuse the sound. Too bad because if we disregard all his gadgets, we see exactly the strong point is clear and warm sound, easily obtained.
Only the compressor is allowed to tease from time to time: I admit it does its job.

So to make the note? : § Must suffer because there are too many tricks?

Ba yes Because I had already tried one in a hurry I found it rather boring, and he lent me a falu that for me to realize that in fact it is con of have a good sound ...
but actually not for the same reason <img class="smiley" src="/images/audiofanzine/interface/smileys/icon_wink.gif" alt="" />

Sound sound! what a pleasure to play at the top is my friends!
a warm, velvety, punchy sweet, a treat. I kept a baffle 4x10 inch ^ and I ask MAG oualala above and it's party at home. I still had too little OCCAZ to play live (the sound engineer we really lowered)
The sound is perfect for me: it was the ron can be something else; the garish it works well.
I play it with a low accuracy in the configuration + neck pickup JazzBass in acute splittable in active.Je also plays with a lot of effects and filters, fuzz, phaser, envelope filter, the whole is very acute rendu.Les fart and snore low mids. The bass are here! So yes, it can be a lack chouille serious, but we do not have too eral because we know we have two 10 "and that if we want the infrastructure we add a 15" .. So I just about every possible sound (roughly). The adjectives I would give her both warm and precise.
I also have a Gibson EBO (sg bass) with his big humbucker. And ba play over there with the Gibson is a crazy thing! a good big sound very heavy and full, generous.
Finally a cheap amp with a real sound!
Goodbye Hartke Peavay and consort!

I've had a few weeks, bought OCCAZ a type that is to find the 6 concerts avec.Je value very correct but I issue a reserve against its long-term evolution.
A symptom petiit any con: one button is literally split in two when I stupidly pressed on without even force. I hope it's not a preview of what to expect in the future ...
If I bought it by accident, I planned on taking a Markbass but a guy I brought him home for trial and it did not do a trick. (Not that I compare to MKB but financially it's still more interesting: I have great HP and a great amp for 400 € ...)
I would come here edit later if I have bad surprises ...