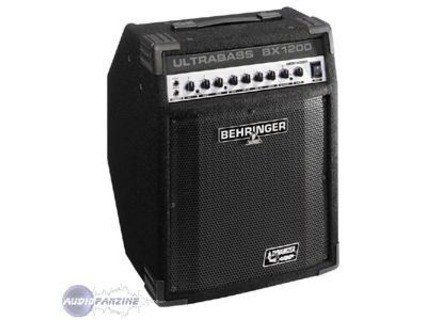 
I wanted a starter combo amp. Checked out Musicians Friend and liked the price, although I was unfamiliar with Behringer products. Anyway for $199.00 I figured what the hell.

What the hell was right! I don't like anything about this amp. It is supposed to be 120 watts. In reality it's 60 watts per channel. I'm sorry, I digress. what I like anot this amp is that when the speaker blew after 16 days (No, I was not cranking it to its limit) while I was practicing scales, The warranty repair allowed me to donate this thing to a charity and writ it off.

The ultrabass function is a joke (Do any real musicians have a use for this??) I used a Fender Twin reverb as a gutarist and now that I've begun playing bass I'm embarassed to have used this amp. This product is strictly for beginners who are just starting to explore the world of music.

Construction was good, it was solid but overwieght (60+ pounds)

Buying this amp was a big mistake. Not that I'm so great (Although I am good) But this amp was way below standard in quality of it's eletronic components. I would be a better amp if they stripped all that ultrabass and sound shapeing crap off and made it one channel with the power they advertised.

Behringer Ultrabass BX1200
5
I purchased this bass amp through Musicians Friend for $279.99. I had never heard this
amp before, but I liked the features and portability of the amp. I also planned on returning the amp if I didn't like it in any way.

The price was excellent. The amp sounds excellent, in fact I sold my Ampeg SVT on ebay after a few weeks of playing with the Behringer. Don't get me wrong, Ampegs sound great, but they only sound like an Ampeg. The Behringer sounds like an Ampeg, Fender,Gallen Kruger or just about any other amp you can think of. With the money I made selling the Ampeg I was able to pay for the Behringer and buy a new guitar.

I really can't think of anything I don't like about his amp !

The quality and construction are excellent. I think they could sell at twice the price.

I have never regretted buying the Behringer BX 1200. Everything about this amp is excellent from the sound to the contruction to the power to the size. I would recommend this amp to anyone at any level.

Behringer Ultrabass BX1200
5
$50 plus traded a Roland Bass Cube. I wanted something that could handle my abuse at home and at rehersals and small gigs.

Sound was much better than the Hartke and the Peavey that was next to it. Plus it was cheaper. I like the ability to shape the sound anyway you want it. It"s size is perfect to put through a car door without trouble or carrying it up and down stairs.

So far there isn't anything I don't like aboput it.

Construction seems to be up there with all the best gear. It's made of good heavy plywood, great carpet, heavy grill and tough corner protectors.

This amp has gone through the ringer so far. I play about 300 gigs a year and started using this at the smaller gigs just because I didn't need to lug my Eden rig. This amp is very versatile.

Behringer Ultrabass BX1200
5
I bought it from a local music store (Tampere, Finland), the original price was 329 euros, but I gave them my Laney Kc100 keyboard amplifier, which I had used as my bass amp, and so I managed to drop the price to 179 . The main reason to change my amp was actually that the Laney didn't like much my Warwick's B-string played hard and it was quite lousy for bass anyway (no proper eq or anything...)

I really like the whole unit, the sound is great and with the shape function you can get a lot of different sounds out.

For example, if you set the channel one for a jaco-style sound, it's only one step on the footswitch and you can get a nice, round slap sound ( well maybe you have to pan your pickups a bit more to the neck side then ). The shape-function really does a lot to your sound, but it takes a while to learn how to use it with the 2-channel system. The BX 1200 also contains an octaver (behringer calls it ultrabass) and it is a nice extra function, but it's not very revolutionary, nice to play with sometimes. As the 2-channel system, the ultrabass is also controllable from the footswitch. The eq is also good enough, but it's shared for both channels.

This combo is also surprisingly powerful. Last day I was jamming with my drummer friend and we did everything from slap-funk to power-metal, and the Behringer definitely had enough power for those situations. It isn't very big but the sound is.


Well, because of the bass reflex cabinet, this one is quite hard to carry aroung and it also weights quite much (compared to its size) but that's it, nothing else to complain about.

It's well constructed and in my opinion the quality of this unit is surprisingly good compared to its price. But it should have some carrying handles on the sides too to make the carrying easier (it has only one handle on the top).

The BX 1200 also has almost every in- and output on the back you could wish for and by the way, the amp is cooled by a fan.

I think that this is the best bass combo I've played. It's well constucted, has a great sound for every situation, definitely enough power (120W, 12" aluminum cone speaker), lots of features, and an outstanding value.

This review was originally published on http://www.musicgearreview.com
Did you find this review helpful?yesno
»
Read the 41 user reviews on the Behringer Ultrabass BX1200 »