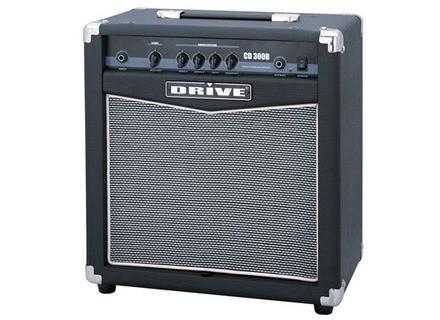 
2 user reviews
Find it in the classifieds starting at $45 Avg used price: $45

Drive CD30B
4
This is a 30W amp trensistor, between a jack, a headphone jack, a volume knob, treble, middle and low presence of more than one knob trs not effective.

Trs simple configuration, no need for manual gives a decent sound pretty quickly by playing on SETTING THE qualiseur

It is relatively Polyval with a fairly flexible
I use it with low low-end home Storm
you can get crystal-clear sound by pushing the acute ds but we send them on the lower trend "swallow" other rglages and it becomes difficult to find another sound.
The sound achieved with reasonably low pouuse of acute and rather can take the road well.

I buy about 80 used for beginners bass and probably the choice I would do the quality-price ratio as far from being scandalous ...
Did you find this review helpful?yesno
»

SweBass's review (This content has been automatically translated from French)

Very simple, simplistic EQ while being rich.
Amp rather heavy, but other Cosponsors, there's nothing chippoter

Tres Polyval, I used to rock.
I played it with an entry-level Storm, and now a Yamaha RBX 374. fiddling with the EQ a long time, there is a great sound!

I es for 2 years in my first pack.
I are moved, transported non-stop, it is still in place!
Whether to begin, and play in his room, it's perfect.
on the other hand, repeating means, but when you push the volume too high, it saturates, and it gets dirty ...
Anyway, let's say it's an amp for beginners.
EQ very simple and effective, head phone jack has that price, there's what it takes!

Anyway, I was delighted until the, but now, I need a new one, to rehearse and concerts.
Did you find this review helpful?yesno
»