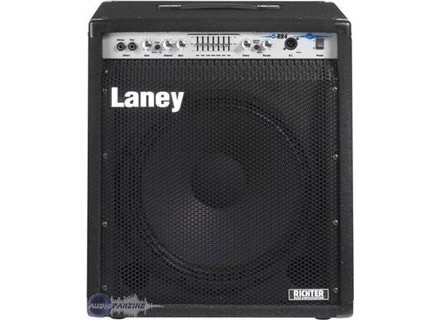 Product replaced by the Laney RB4.

Laney RB4 Discontinued
5
Transistor amp it says 300 watts, but that it will be with the additional HP as the combo alone under 8 ohm, 165 W. fate
Settings: gain compression (only 1 setting, discrete), enhance (bof), bass, treble, équalo 7-band tweeter on / off, limiter (or rather HP protection mode on / off, hired by default), and master
An effects loop, tuner output, a DI out

The config is simple, the sounds are quite malleable, so it manages to sound different bass (6 string fretless 4), and play with different styles.

No surprise, to play rock between 2 fridges (1 marshall for the guitarist on the garden side, 1 Framus courtyard) and a drummer behind expressive, it appears.
Even if the sound seems neutral when setting line6 pod xt input a certain amp models are not at all compatible with the amp - this is it has a color to it.
A high volume, I thought were very sharp treble: option 1, lower treble eq while leaving the active tweeter, but works much better option 2: cut the tweeter!

Used in recent years, in rehearsals and concerts (bars / outdoor transplants).
The feature I like the most: it holds up, we can always find a frequency that guitarist - by chance or luck - let free, and rush in with the equalizer, which is specific .
The feature I like least: the plastic side handles, which break in pieces: first because it is difficult to carry, the second effect, it puts a vibrating more unsavory. I thought I was going to change the HP to use the good old protocol "I disassembled the stuff one by one until it works again."
With experience, I would do this choice.
Did you find this review helpful?yesno
»

Kulten's review (This content has been automatically translated from French)

from left to right are: normal and high input, gain, compressor ON / OFF, ehance, Bass, 7 bands eq.graphique, treble, limiting on / off, volume, XLR direct output.

10/10 not because no headphone jack but the sound is good as well defined even at low volume is not too bad ...

aesthetically, the plastic buttons of poor quality imitation metal, it's horrible, I've exchanged against black and gray buttons to go with the whole.

There is to find a bass sound of his choice, eq. graph is super efficient and we can boost / cut cushy.

we test, we paufine, and once stalled the manual offers pristine panels to record the settings.

change of in three seconds if you want.

The (-) rapid saturation at high volume for the portion of the ultra-serious when it is fully (there, the Fender Rumble 100 scores a point, it does not saturate)

the (+): potatoes but not so aggressive growl, the sound sweet but without losing power, Laney is very versatile ... the sudden lack of personality can interfere (in this case and see Hartke Trace), I usually cut the mids, I play with flat wound strings and it makes a big deal without being too "round", the compressor is effective without undermining the overall strength and can play on the pot "Enhanced" by promoting the bass or treble, and then it's solid (I had one before Linebacker 120B, nickel, too).

For not much more expensive than 100 Watts at Hartke Fender or Ampeg or you have a 160 Watts effective, but must love the sound british to try!

the géant vert's review (This content has been automatically translated from French)" what they did at Laney?"

I had gone to buy this amp: I liked everything, power, opportunities (taken, adjustments, etc. ...), the 15 'Celestion, ergonomics, etc. ...
Big disappointment for the test: it does not at all serious when we attack the 30 w about the hp and drool heels. And yet I have only 4 strings!
But that did Laney? : A strong brand that builds long-amp, Celestion is also famous. What a pity ... Aye reputation! I'll have it looking for a bass amp that renders a descent Fa Sol La (on the low E string, of course!)