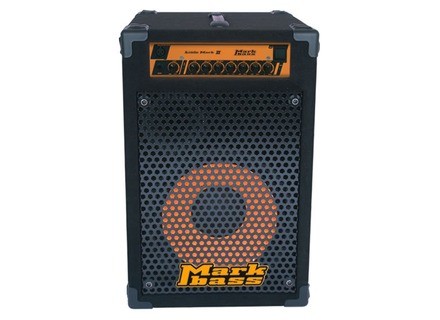 Markbass CMD 121H
5
The MarkBass CMB 121H is a bass guitar combo amp that is suitable for use in the studio or for live shows in smaller venues. It's got a 12" speaker in it as well as a tweeter and both XLR and 1/4" inputs on the front panel. In the back it's got a speaker and line output, as well as send and return 1/4" connections. This is the perfect bass amplifier for those looking for an amp to bring on the go...

Using the MarkBass CMB 121H isn't difficult at all, but it does have some extra parameters that you won't find on most bass amps. It's got a four band equalizer, as well as parameters for VLE (Vintage Loudspeaker Emulator) and VPF (Variable Pre-Shape Filter), which are certainly unique to MarkBass amplifiers. These parameters will take a little bit of fiddling with before you're comfortable, but they add another dimension to this bass amp that most bass amps don't have. The manual is put together well and is very thorough...

For a combination amp on the smaller the size, the MarkBass CMB 121H sure packs a lot of punch. I'm primarily not a bass player, but played a live show with a bass player who had one of these and we were all really impressed by the fullness of the sound and by how well the amp worked in a live setting. The venue was definitely on the smaller side, but if you're in a large venue chances are that you'll be miking up anyway. I later used the amp in the studio with the same bass player and the sound definitely translated well. In fact, it probably sounded best in the studio since you could really zero in on your tone. I didn't get the chance to mess around too much with the VLE and the VPF features, but it seems like these extra parameters really help to set the bass amp apart from others.

While not extremely well known outside of the bass community, MarkBass has become known for offering up an impressive line of bass guitar amps in all shapes and sizes. The CMB 121H is overall a perfect example of what they are capable of doing. While you're going to pay a bit more than you would for this amp than others, in my opinion it would be worth it since you're getting a huge professional sound in a portable amp. If you're in the market for a bass guitar combo amp, definitely hip yourself to the MarkBass CMB 121H if you don't already know about this company...

Markbass CMD 121H
5
Everything is saying he will miss an output tuner ..

The very very good sound, it's not a cheap amp that just makes noise.
The sound is prcis, bold enough in the low mdium a dish. The equalization is very effective, it is easy Scult sound demand with 4-band, I personally do me that very few of the VLE and VPF. It's very well but I like the natural also ...

on the other hand I prefer the 12-inch model is prcis, version (which is great) 1 (inch hair is too runny for my taste.

After too many years pter my back for toting SWR redhead I have invested in it and do not regret it.
I have for over 2 years and I could not do without me. Rpts, concerts, bars, big scenes ... it works for everything and no one power bar when you say to wear the bass amp.
It's expensive but it's good

shukran33's review (This content has been automatically translated from French)" a killer ..."

Markbass CMD 121H
5
for technical specifications, everything has been said, and is the site markbass also ...
precision, the mine has a little head mark III
I took the time to use it (work at home, and repet concert) before this little review

fine adjustments with the 4 knobs, the two filters are interesting but I do not use hardly ...
config ultra simple, branch is already all knobs at noon it sounds terrible, then it's easy to find her.
manual I have not recovered from the previous owner ... not needed

I found this amp in two stages, first with my cort ... already a big slap ... and I just hit a JB of occas ... and there is nirvana
it really respects the characteristics of the instrument is accurate, it broadcasts, I drill into the mix as ever ... this is the most accurate on the other hand, and breads, it forgives not (but that force work properly )
I love all the sounds, I love the dynamics of the 12 '... before I had a combo asdown in 15' ... day and night
I love everything, pushing a little gain, you can get that sound a little crunchy slightly saturated dégeu not

retrieved 6 January is a good month ...
I was looking for a good combo powerful enough to concerts and extensible bar when needed ... and especially lightweight (18 kg a feather ...)
My teacher has the same low, I loved it. I still took the time to try other models, but such a quality power with that weight it there ... not run the streets
and this is very serious side finishes (well. .. it's yellow ... but at least you confused with a scratch amp!)
short, I love everything ... and not least for my part
side value, it is still expensive ... but it deserves the
I would do this choice without flinching ... besides, I'm not ready to let go, and the next will surely be the markbass
For people like me who was a little afraid of the neutral side amps markbass some advice ... advice, try it!

warwick's review (This content has been automatically translated from French)" Performing and traveling!"

Markbass CMD 121H
5
For specifications, see markbass site, it explains better than me.

The settings are easy to obtain in order to model the initial sound. Although the amp is small, we can clearly see all the knobs when playing standing up, of course, to touch, need to look a little but anecdotal. On connectors that are well hidden in the back, there is a hatch for easy access. Smart on Marco! A power supply cable of 3 m is significant. Or Speakon output jack (the same) to add more bowls, also significant.
In short, the config is simple and the manual ... well I dunno, I have not opened ... It is also where?

It is suitable for all styles. It also depends on the low hip. With a low entry level, this amp can save the day. With good bass, it's happiness. Personally, this amp perfectly restores my Warwick Corvette $ $ 4 string. His bold, crystalline harmonic or slap, do not settle for a 3 days a versatile, the VLE and VPF filters 2 are a good help. I full of effects pedals, the sound is restored.
I put 9 in order not to 10.

I have since late July 2011. I tried many other models but the one that best suits my application:
- A colorless his best to express my bass.
- Easy to carry (with one hand, the pedalboard in the other hand, the bass on my shoulders and I have her with me).
- Powerful (he're all alone but I couple times with a 4x10, then smashes it).
- In a budget available (nine, his case is not too much).
So I am happy to have found this chick used.
I put 9 because it is expensive if you take no chances.
Until further notice, I do it again this choice.

Did you find this review helpful?yesno
»
Read the 6 user reviews on the Markbass CMD 121H »