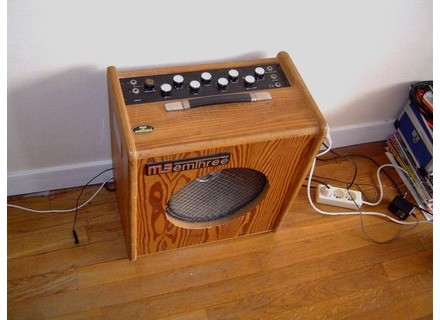 TomTom Clun's review (This content has been automatically translated from French)

Emthree Guitar Combo
4
Transistor amplifier, Prora dating from 1979. 80w, even if it does not seem big trs. Together against-plated semi-open. As you can see in the picture, just a grid forward to the HP being protected, and the rear fabric protection. Config extremely simple, I guess it's an electro acoustic seen that there are only nine knobs: two types of effects (severe / AIGS), HP volume, Bass, Middle & Trebble (so far tt is well ...) a reverb, a simulation of lamp (valve sound), & a master according to the input that we use a compressor. The PPRE possde 3 inputs (1 & 2 + a remote) and three outputs (two extra amps and headphones). No sheet noon as audio.

The arch configs are simple but very subtle. The two charged and two DIFFERENT types of effects each bring their personality. Even when He took some time to find some sounds, note with reverb or valve.
My headphone jack and an extra of 2 are crappy amp.

By manipulating all the knobs, you can have plenty of clean sound Different. Small precision, I only play on one electric. It is easy to get sound is crystal trs (with a lot of sustain) is round and warm sound (though it is a transistor!). With some rglages (guitar & amp) you can have twang sounds jazzy good or vice versa. The reverb is pretty good. If one engages the valve + reverb simulation, we get a weird glassverb (such as water or in the hall of mirrors ...)
this amp does not purr, even very hard.
The compressor as it is ffective if you push the volume and that is corrected with the master.
The inconvnient, although Obviously there is no effect. But finally, when you plug in a, it leaves it fully expressed, without polluting, it's great. My SD-1 died on spits!

Baptismal washing machine because it leaves HP and probative good vintage knobs, I've had ten years. Unlike what you may read elsewhere on this brand, the sound is nickel and bluff more than a friend. Also, I've never had shit with. I have never seen others like it and can not find the doc or photo on the web. I play on a Pacifica 112 and it'll return ts sounds great.
I'm not PRS me spare.
Did you find this review helpful?yesno
»