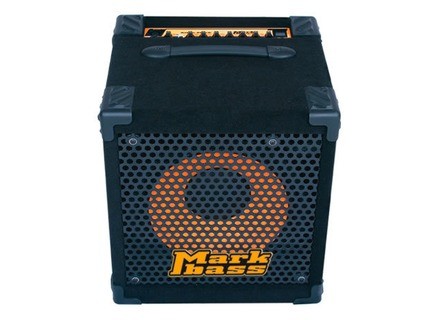 Markbass Mini CMD 121P
5
I have lots of heavy gear, so I opted for this one due to its weight.
After several months of use, I can confirm its good performance.
A 15-incher will certainly go deeper, but it's unbeatable in terms of weight.
I have tried it out in situations for which it certainly wasn't foreseen.
It sounds clear and precise with a double bass...and it also sounds fine with an MP3 player.
Especially due to the limiter, which is very effective and prevents the amp from exceeding its limits.
The folding Velcro wedge to position the amp is very useful. It couldn't be easier.
Its only negative point is the price.
Did you find this review helpful?yesno
»

Easy, you can get almost any sound.
It sounds just as god with a bass as with a double bass.

Alls types of sounds, I prefer the round sound or a Marcus Miller one to slap. I play a Rick, a Jazz Bass us 5C deluxe, a Jazz Bass 78, a Squier Precision, and a Vigier. Always faithful.

What I love: Its weight and value for money

It's also sturdy because mine fell twice off a table and still works perfectly.

Very easy to amplify via the XLR output.

It's an ideal amp for small clubs, coffee shops, restaurants, etc.
Did you find this review helpful?yesno
»

Markbass Mini CMD 121P
5
Everything has been said in the previous reviews, it's 300W or 500W solid-state amp with an additional cab.
I added to it a 2x10 cab to rival my guitarist's tube amp + 4x12 cab.
This also spares me having to crank the volume to max, since I always like to have some extra power reserve.

It's very easy to use, If you are looking for an all-purpose combo with tuner, USB port, parametric EQ, 2 channels, built-in overdrive, etc., you'll need to look elsewhere.
But it was exactly this simplicity I was looking for. If I ever need different sounds then I turn to my pedalbard.

What I love about it is that it doesn't alter the sound of my instrument.
The combo has a good dynamic response, it doesn't sound muddy.
I also bought the MarkStand, at first just to see how it works, but it has proven very good for small venues to increase the diffusion of low frequencies and reduce the reflections from the ground, the sound is more precise.

The EQ's frequencies (360Hz and 800Hz) are ideal for my music style.
I use the MarkBass filters with caution:
- VLE allows me to remove the tweeter's noise
- VPF allows me to cut more or less through the mix depending on the moment and place

I bought it one year ago.
It convinced me after trying it out with my own gear at the store. I also tested the TC BG250-210, SVT BA-115 and Warwick BC-300 combos, besides having played half a dozen of two-part combinations that were either not good enough or out of my budget.

I also tried out at the store three ABS active PA speakers (between 900€ and 1200€ per unit) to compare electrical and acoustical power.
To me, this combo delivers the 800-1000W of the ABS speakers and even more, the latter produce muddy lows and have poor dynamics.
It's a bit like the real temperature and the temperature with wind-chill factor.
It's hard to cut though the mix with the ABS speakers, whereas the sound of the MarkBass literally pops and has a great diffusion for it size and weight...28.6lbs (13kg).

The only snag is the access to the inputs-outputs (return, send, tuner, cab), which are hidden on the rear and aimed towards the ground. So you either turn the combo upside down or you lie down to reach them, but once plugged you'd better not need to ouch them again.
Although, I don't think the engineers had many options trying to design such a compact unit, due to the fan, the vibrations, etc. So, that's not a major issue to me, since I bought it in part due to its compactness.
Did you find this review helpful?yesno
»

Markbass Mini CMD 121P
The only thing I can criticize about this model is the accessibility of the loop and other additional connectors (on the rear and below the huge speaker, so you need to turn it upside down if you want to make any changes).
Other than that, it's a great pal that can handle anything, from roaring to caressing your ears with music of any period.

It's very easy to change the sound without the EQ, thanks to the two filters.

It can handle any sound you want. Some people might reproach it that it's less rock than SWR, less bright than Trace etc...Well, you should buy a Trace or any other brand if that's what you want.

I've owned it for one year.
I've had tons of average gear (gallien, Carvin, etc.) and have used better ones in studios, if you want to make a compromise without compromising and changing amps because tomorrow you play Latin but next week you play metal, there are more expensive but less good options out there.
Did you find this review helpful?yesno
»
Read the 22 user reviews on the Markbass Mini CMD 121P »