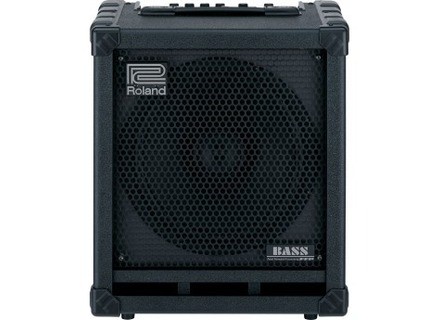 rha61's review (This content has been automatically translated from French)

The use is somewhat complex
I think this amp need a break because it sounds better after qq days
it s best expresses when mounted volume, better hear the simulation work
the manual is super damn good, very complete

The amp is confusing at first because it didnt personality of particular compared to other brands
but it has a beautiful grain and when one masters the best possibilities, it's a great amp that hard, serious and has the power for gigs in small caves
very nice sound when the trouvbr />
NOTICE GLOBAL

I possess the big brother happily DB500 for 3 years and now this little lighter cube. I hesitated with the Ashdown EB12-180 (typ beautiful sound but too heavy 23kg), the Markbass cmd121 (big sound but perfectible medium, very lightweight but expensive, 970), SWR workingman 12 (beautiful sound , space-saving) and I have finally chose Roland is a kind of balance between everything
super growl, is well worth a good bass
super quality for money
Did you find this review helpful?yesno
»

Roland CB-100
4
amp transistors modélisation.mais I think mine is 80 watts ... we do not care a bit, actually.
what is good is that the integrated compressor is not too unusable for once.

you can put footswitches to activate certain functions, and it works well with other brands that are worth a third or less of those not supplied by roland

as usual, turn a knob (well yeah, if you press it it does not work, it is rotating) to access what you want, and so if c not function right next door, well we was not a sound you want in between.
otherwise, it's great correction 'as son.j have it anymore in the ears of the original sound with his pregnant swr goliath that I had the chance to play in studio rehearsing in my youth, and I also never owned or tried 70 tube amps, but you get the sounds are supposed to model it, and like its got is nice, no need to complain.

was relatively easy access to bass sounds, if only one branch in an over.
I am all in favor of Swiss Army knives, this month is a bulky tool box

this is one of the first things I bought at tho tho, back and more customer, thus cheaper, and with a present bass strings in the two package.les have I found a very good value for money.

linkcommander's review (This content has been automatically translated from French)

The amp has a button that changes shape somewhat the sound of each amp model according to which it is applied.
The effects are the number of 5, except the octave: Chorus, Flanger, Auto Wha, Reverb and Delay, Compression plusune quite effective equalization is done in four steps (Bass, low and high mids, treble).
The amp has so many connections and possibilities.

The configuration is relatively simple, since there is to choose its simulation and set the EQ accordingly. Compared to the Line 6 LowDown, I like the fact that equalization is indeed what is shown on the front, it is not necessary to its presets in memory.
His level, some models are quite disappointing, as the Super Flat and Trace Elliot, but these aside, the simulations are quite convincing.
A downside, however, I still have not managed to get a preset that works for the distortion and the clean.
The octave is unfortunately difficult to use because not activated by footswitch. It's a shame because it is very compelling.
Manual level, no problem is clear and precise.

This is an extremely versatile amp, no doubt about it. I play it with a MM Stingray and a Cort Action Bass with a Big Muff and a Dunlop Wha. As I said, I still have not managed to get good sound in distortion, which is quite annoying since I use it regularly, but the clean sound is very convincing, especially on the modeling session or Bass 360. Other models are nice, but it is clear that not all useful (Octaver for example).
Side effects, they are used despite the lack of settings, and they do not sound too synthetic.

I use deuis a year and a half. I love some simulations, but unfortunately the problem of distortion pushes me to sell it. In addition, this amp may not be suitable at a low to a higher range and has an unfortunate tendency to saturate when you push the volume, giving a very "Rickenbacker" not necessarily unusable.
This is my second amp, a Behringer after he m'apermis to a concert and took the blow without flinching.
Its price / quality ratio is excellent, however, given its many effects, both in terms and in terms of equalization and simulations available.
If I had the choice again, I think I would do if I had the same budget requirements, in my opinion it is hard to beat in its price range.