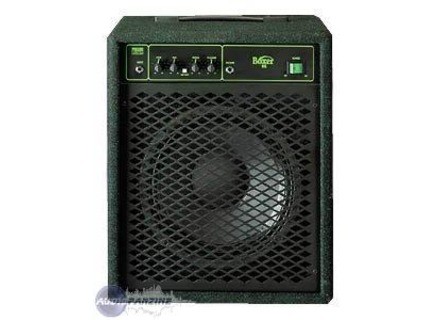 Trace Elliot Boxer 65
4
This just a small box with a 12" speaker. Volume, Treble, Bass, Mid (with mid-shift button)and Master volume. I play jazz, R&B, Light rock, etc. I use a 5-string passive jazz bass mostly with this amp. I have a 500-watt Trace combo for gigs and this one is for lessons and small gigs.

I bought this used from a music store for 150.00 and feel like that was a reasonable price for the quality.

This amp has good tone and it is very typical Trace tone. Because of the small cab size, it is not going to get tremendous bass response and it doesn't have a built in compressor, but I still like the tone very much. I really only use this for practice and lessons but I think it would be loud enough for small gigs and rehearsals in a non volume intensive situation. If you try to use it in a loud band, of course you'll be dissapointed but that's not the amps fault.

It could be a little lighter for my purposes. If it had a line out, it would be more useful.

I think it is good build quality. Definitely more solid than some of the practice-level bass combos out there.

It is a good amp to own for certain applications. It has good tone and is fairly loud. I happen to love the tone of Trace amps, so I like the tone of this one.

Trace Elliot Boxer 65
4
Daddy's Junky Music about $240 used but not
looking used at all. I was just wanting
something I could more easily carry down the
block and or up and down flights of stairs,
but I really liked the sound of my old Ampeg
B100R 15" combo. The Trace weighs only 35lb
and is 2/3 the bulk but 1/2 the weight of my
Ampeg, and sounds at least as good. For a
a small venue volume is adequate even with a
rather low-output bass. With a hotter bass
it's plenty.


To me the best thing about it is "70lb tone"
in a 35lb package, with only minor loss of
volume. Controls are silly stupid simple
like a practice amp: guitar-in, 4 knobs, and
headphones out. I actually like its tone
better than the sound of my 15" Ampeg, but
it's no huge difference and is subjective.
My taste runs to mellow but not mud or thud,
and I want to hear the woody-ness of a hollow bass and/or the full effect of a fretless. These amps are also relatively inexpensive, sold well under $400 brand new.

Negatives are that it's lacks a line-out and
that even if it had one, it can barely serve
as your monitor when the band gets loud IF
your bass has a low output [but would that ever really happen?]. Except for low output basses such as passive humbuckers with flatwounds, I can't complain about volume. It also has no effects loop, and only a single combined gain and volume knob [trace claims it really is a combined knob, not one or the other].


It's a typical vinyl covered box, although the perforated metal speaker grill is a real plus. Looking through the grille there appears to be front porting, but it's not very much. The knobs face forward, recessed enough to safely lay the box down on its front side for transit. It came with small rubber feet that I replaced with larger ones. The AC cord is removeable, typical computer type, socket on rear, not recessed. Typical topside handle seems well anchored. It was not new when I got it, and so far it has no problems. I've played it twice a week for several weeks.

It seems to be a small-ensemble amp, maybe
for upright bass, "dinner jazz" electic bass, or most uses short of rock stardom or large pfunk operations. It's *accurate* or honest in tone, by which I mean that varied different types of bass each clearly come through with their own characteristics very much intact. But by accurate, I don't mean
"sharply focused". It's a touch blurry, no
excess finger or fret noise, but rich and full sounding. As a general use combo, I'm rating it at "4" but if you play in a small
ensemble, you might rate it at "6".

Trace Elliot Boxer 65
3
Small bass amp with transistors, 65W as the name implies, a 12-inch HP.
Custom designed to work in my opinion.
Simple connection: An entrance, a headphone output, and that's it. In particular, no direct output or output connectors amp ...
Settings: Volume, bass, med, and a treble booster. EQ efficient is not to say.
Very good build quality overall.
Namely that on mine, I had to add handles, but I've seen elsewhere with a handle on top. Also on mine, the knobs were poorly developed (the plasticky buttons were poorly placed on the knobs), I had to remove and recover properly. Nothing serious, it had to be assembled on a Monday morning ...
For this reason, I put that 9 / 10

You should know what you want:
He is 65 W and an HP 12-inch, so it is sufficient to work a title that goes on CD or ranges, or accompany an acoustic.
Once we talk about battery near (repeat or concert), need to remember: Unless you have guitarists who not push their amps (very rare ...) and a drummer strikes slowly (also very rare ..) this amp is not powerful enough. Or it will really have to push to its limits, and its release a draft (Oddly, the Si is no longer an infamous porridge even my 4-string to that point). I tested, that's when I switched to a more powerful amp (Fender BXR 300)
It has good sound, but it is a valid volume for which the amplifier is designed: raisonnnable ...
I have not had a good manual that I have bought new in store.
Remaining within its limits, I put 9 / 10 BUT this note is only valid in the reserve.

Already answered above: Excellent volume reasonable enough for a rock band.
Capable of many different sounds through effective EQ.

With the experience not because I wanted to play rock and it was clearly not strong enough.
I keep it in case I have a really big problem with my main amp, but I'll have a big support through the sound system ...
I would not say it's a bad amp, but it is not powerful enough to play in groups.