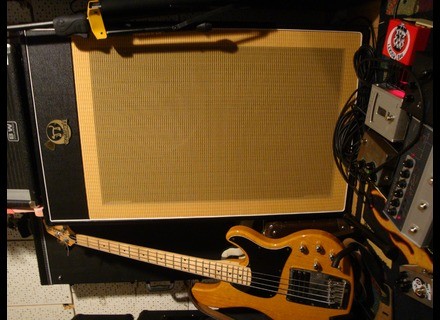 Chillbass 2x15
5
I was looking for a powerful speaker, combining roundness fishing and responsiveness.
2x15 It goes beyond my expectations!
It is very well finished and my aesthetic taste.

Hyper-reactive (I was a little scared for two 15 ') very bright, very rich in harmonics (100 Chillbass head is not for nothing!) And of course the bass go perfectly without aggression and with great natural .

I had Markbass, SWR (a lot) of Fender ...
I never had this feeling of clarity in the sound, it's clean, it's powerful, it's massive, it's short for audiophile gear without the "coldness" of certain materials deemed Hi- Fi.

MortVivant's review (This content has been automatically translated from French)" It rox pony!"

Chillbass 2x15
5
I invite you to look at the link below:
http://www.chillbass.fr/fr/produits/baffles/item/baffle-n1-fr?category_id=1

Note that mine is equipped with two HP TF 1525th for it turns into 4 ohm.

The cabinet sent the sauce with 2x15 ferrite!

As said earlier, we do not penetrate as much as with the 4x10 or 8x10 but it is sure that the group draws one's muscular. I get a sound that certainly support my guitarist.

The sound is deep and well defined, even while the HP is still in a period of "running", it sounds ROCK slap and yet even I can draw stuff very friendly.

I mainly play with the distortion and fuzz on it and everything goes fine!

Previously I played on an old 15-inch Montarbo in which HP was dead.

Still, I have tried a Fender Rumble 4x10 + 1x15 and 4x10 EBS Proline with my current config and it would baffle Chillbass comparison smoothly, although this is not the same HP, construction, etc. ..

Given the prices and the overall quality I remake that choice without much hesitation, more conversion with the boss and tips gives the image of a passion.

moixjj's review (This content has been automatically translated from French)"pfff! Incomparable!"

Chillbass 2x15
5
A few months ago, I started looking into the ultimate speaker for my group of hardcore stoner. I was pretty happy with my sound with my Ashdown ABM 414 but I was sorely lacking good to hear that big bass charcutent while drilling into the mix and staying sharp. My old friend Ashdown had the bowl too small for what I wanted.
So I turned on my computer and went around the world baffle: Gallien-Krueger, Mark Bass, Ashdown, Ampeg, ... Well, a baffle is just a big wooden box with hp at the base. If the hp is good and the wooden box is damn, that&#39;s the case. If anything can be both lightweight, inexpensive, well designed, beautiful, and built in a place where it operates not rice farmers exiled in the suburbs of the city-glaucous plants in Asia, it&#39;s perfect. And then I quickly realized it was a lot to ask the current industry that makes things ugly as hell in the woods sounds like cardboard. To avoid having to sell a kidney for the TecAmp stick or a fourth for a hernia Ampeg, he must resign ourselves to buy Made in PROC (popular republic of china). Yuck.
But rather than resign myself, I persevered and I came across the website of Chillbass. Of beautiful cabinets, made in France and whose series "Classic" is team Celestion Ferrite RAAA! No tweeter, a vintage design, weighing more than adequate and a great price, here I send a mail for advice.
Crown it all, I quickly realized that Fred, the boss of Chillbass, is passionate about is a fan of rock and roll. Following his advice, I opt for a 2x15 cabinet with Speakon connectors & Jack, a black Tolex, 500W into 4 ohms hardcore, a beautiful beige grid and a rectangular clearing in the back which I measured the value that &#39;after playing the beast. All this weighs under 34 pounds for a perfect size. For 650 Euros, I wonder where is the scam. But hey, presto! I order.

The animal is built in two weeks and reaches the local one day in early October. I plug in my head Genz Benz Shuttle 600 preamp with my Tech21 VT Bass Deluxe, my Lowerdrive Mazzetti (cocorico!) and my Ibanez ATK 95 &#39;Wild Card by Japanese Custom Guitard (crow). If more than half of my stuff is made in France, I Helvetian, so do not see chauvinism. Mazzetti is objectively the best overdrive for bass out there, and Wilders are the stuff the best I&#39;ve seen.
Anyway, I branch after playing just its my Ashdown 4x10. And here I must say that I was first surprised by the quality of bass and sub-bass. What a pleasure to be a bassist. Stand legs apart in front of his cabinet is like sky diving naked. But in a second time, I was also impressed acute. I was scared of losing and it&#39;s not the case. The bowls 15 "pull down the spectrum, but since I do not play slap and I am granted do drop, the frequencies j&#39;utilisent find their natural place in the frequency range of the cabinet.
Most importantly, I finally found the HP with the personality and the grain is bold, punchy, and powerful desire. The dynamic is great and responds well to a game virile. In the low or high frequencies, with a lot of gain and overdrive of Mazzetti, the speaker roars of pleasure and sends accurate bass. In rehearsal with two guitarists who play on Marshall 100w DSL and TSL and a beefy drummer, I play 2 of 10. However they had to lower their low frequencies because the puffed them. But hey, we&#39;re here for other bassists bass frequencies right? Note that even if the presence of the bass is not as strong a priori on a 8x10 sharper in contrast more in the mix, the overall sound of the group gains much strength in depth and background.

It&#39;s been 15 years since I played music and tried a lot of basses, amplifiers, speakers, preamps, pedals, ... I also had three herniated discs before age 32, three groups have more or less market, and live very good and very bad in very good and very bad with very good groups and bad. I do not have the word of the prophet, but something one is safe, I plugged my little system for a concert last week on an Ampeg Classic 8x10 Charolais bull that weighed one which must have cost her some UBS shares Swiss German owner. Well not content to be cheaper, lighter, made by a passionate Chillbass makes the best. Definitely better. In defense of Ampeg, I still have to say that this speaker had a soul, it makes something magical. But two meters in front of the cabinet, I could hear the bass. That bundle. So to repeat the choice, yes, without hesitation. And when I sub (the Swiss also are broke), I will buy the all-tube bass amp that goes with it and a smaller cabinet for small gigs.
Eat French! It is not more expensive is better made, we are better advised, it is more beautiful.