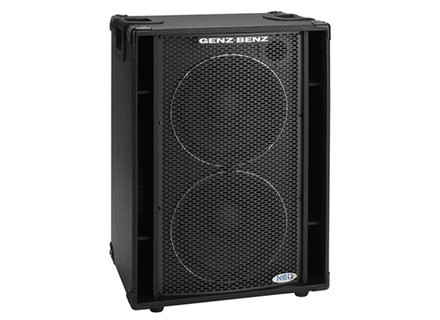 NEOX-212T, Bass Guitar Speaker from Genz-Benz in the NEOX series.

Dr_Raousse's review (This content has been automatically translated from French)

Genz-Benz NEOX-212T
5
I was looking for a compact cabinet and practical performance in repeated and easily transportable in concert. Something light, not bulky but effective. I did not intend to extend the stack. By educating me, the cabinet was deemed neutral. I was interested because I intended to have the flexibility through the head, and not be blocked by the cabinet on sound research. I also liked the look discreet enough. when unpacking, I was positively surprised by its robust construction.
The idea was to put in a header that meet the same specifications: lightness, efficiency and robustness.
I put a 9 to 4 º due / 600w, but one does not count extend its stack, it is rather an advantage: it is said that "every watt going" ...

After testing in a MarkBass SA450 head, whose qualities are highly versatile and neutral sound, I could appreciate its pure sound quality: pretty neutral, maybe a little less clear that Mark Bass, and an adjustable tweet. The 12-inch speakers provide good sound spectrum and diffuse well. I finally sold the MB to get me a TB closest genre I play, which has a saturation lamps.
Vents complete this device very well and make this a very cabinet. A good distance from the wall, slightly raised, we do not need to play hard to be heard, which makes less strenuous rehearsals with a single 15-inch one is forced to push to distinguish notes.
The nice surprise came from his response to the game: with saturation, and depending on how low the strings are attacked, there is a real response in the sound. Playing gently with a "heavy" amp (Orange, Ampeg), it has a really sharp in sound, great bass present but at the same time distinct.

I used 3 years. My group when I was bassist stopped, and the cabinet is now under a sheet (I passed on the guitar). But I do not resell, it is a valuable tool which I do not separate myself. Previously, I tested the Mark Bass (more expensive and neutral rare finally 2x12) and Ashdown, friendly, cheap and colorful (but seemed very effective, "ate" sound), and the Hartke (which removes the saturation).
For rock / punk-rock, with a game in Entwistle, that is to say, harmonic and varied, it is ideal. For not very expensive and not very heavy, hyper-efficient cabinet, sensitive game, a very versatile tone, you get the equivalent of a much more expensive ride, heavy and bulky.
So I put 10 ...

The tweeter is well over the two 12 inches, the sound is what you want regardless of the style