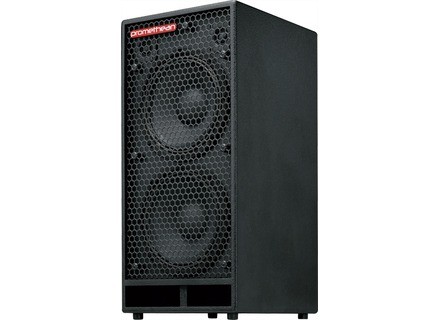 P5210, Bass Guitar Speaker from Ibanez in the Promethean series.

Ibanez P5210
4
First, this is not a speaker but a combo with dual detachable speakers (the amp head can be lugging a bag provided for this purpose, case very good way). Basically, I was looking to buy a MARKBASS CMD 121 P 102 P or used but I did not find in the price range I wanted (all deals went before I had time to reacted). I stumbled by chance on a forum where owners of Promethean P5110 acquisition compared to a Markbass CMD 121 but cheaper. So I searched the classifieds and I came across a P5210 OCCAZ near me. The guy wanted 550 euros, but considering the aesthetic state (he had a little "suffered"), I got it for 400 euros. After sanded, painted and then be mounted on casters for added comfort, I got a new amp nice look and lighter (more than others, at least).

The guy before me was the rock concert in pubs. For me, it is never out of the house. The sound seemed to me very honorable although I&#39;ve never really been able to collect all the subtleties of the equalizer filters and saw that I have a little problem with the perception of frequencies at low volume (including acute), and no question of push his home because Mrs. mouth before panes begin to tremble.

On this point, I&#39;m not sharp enough to give my opinion. I can only say with my Cort A4 of the time, it slammed severe active mode as long as we find the right settings. The more acute the equalizer seemed to me unnecessary because hardly noticeable with low (against one heard the difference with the mp3 connected), but as I said above, I have a little problem of perception high frequencies at low volumes.

I used it a year and then I came across a deal not to be missed (a Markbass CMD 151 P at a very reasonable price). So I had to separate myself to finance my new acquisition. Today, I think I should have to keep since it was nicely for rare beef at home with my couzin (I do not play as a group because they are too busy with my job). The power output is the same as my CMD 151 and I do not have the ear or the lower suitable for fully appreciated the subtleties of all the settings on my Markbass. Its ergonomics are outstanding: the arrangement of baffles height allows storing all the weight is about 15 kg (memory) and the fact that the amp head detaches to be carried is very convenient. I liked the fact that the coating is not paint and carpeting, unlike Markbass that attracts dust and my cat is eager to go inaugurate its claws.

If I had to do, is what I would buy? At that price yes without hesitation!

Do I revendrais? If my wife had not brought me misery when she learned that I was going to buy a new amp and knowing that I&#39;ve tois low when I do use one (and blah blah blah ...) I&#39;ll probably preserved.

Do I prefer my Markbass CMD 151P? I can not speak: the Promethean, I played with a Cort A4 while the Markbass, I play with a Fender aerodyne mounted with active pickups (aquired at the same time). I can not compare. With my flying V bass Epiphone tried both, I do not find much difference, except perhaps at serious that are more powerful with the Markbass (but not necessarily the most beautiful, but high volume).

Resale side, a Promethean resells hardly even cheap compared to a Markbass which remains a reference. Anecdote though: failing to refourguer on the internet, I proposed to the shop where I wanted to buy my new bass. The seller who had criticized the Promethean amp last week, not knowing that I owned one and hoping refourguer me a new Markbass, I picked mine at 400 euros without even try it (the price at which I had purchased) and while I did not take it a low used instead of new that I had come to try. Given his attitude and knowing that it will most likely sell the most expensive, I thought that my amp was finally better than good.

In conclusion, although I am a novice in terms of amps in general and more specifically in terms of amps 500 watts, if you are less than 500 euros and in good condition, I recommend you go at least the try.