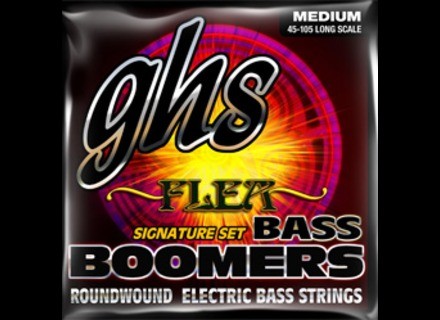 prprprpr's review (This content has been automatically translated from French)" A SHAME!!"

The problem is that other post gives the same opinion, so there is a big problem in manufacturing

GHS Flea Signature Bass Boomers
2
I have mounted a series of concerts.Environ before 6 months. It's time I keep my strings a little prés.Je paper towels at each end of the game and I spend fast freight.
I played with Warwick, the Ernie Ball, D'addario and above. I had to disassemble the DR hi-beam and beam-Fat rinsed my Warwick and mount these GHS promo. Bad plan ... Less effective than DR and percussive, slap really not transcendent and other noise on the rope MI.Comme if the soul vibrated in the turns. In the end, between the DR, not exceptional but expensive and the "Flea signature", there's other strings in my opinion much better value for money ...

tuturvkr's review (This content has been automatically translated from French)

GHS Flea Signature Bass Boomers
5
This was my second set of rope, 2 years ago

I love the sound of a slap in the E string, it has something special! One begins to Flea

I had tried others before and after I tried them all, for me they are the best!

EXCELLENT value for money, between € 25 and € 30! they are worth much more, slap often, the guards three months, so if you do not slap lol ..... 6 months
Did you find this review helpful?yesno
»

cisco_closer's review (This content has been automatically translated from French)

I wanted to change my strings had a year (but obviously well kept as they were just a little damaged) and I chose these signatures Flea.
I love it!
The sound is metallic with a pick, very soft to the finger and downright crazy in slap. The treble is not too gaudy and the bass are striking. I play on a Rumble 100w, and I really felt the difference with my old strings, just for the sound: I had to turn down the volume of the amp to not bring down one of my walls.
I bought these strings € 35 in-store, knowing that a set of Ernie Ball Classic was worth 40 .. I think I made the right choice =)
I do not put ten because I think the sound of these strings is quite pronounced and this might put off some alone, mostly for fans of the game with a pick, the sound is pretty special, very metallic. But to play rock / metal (with a pick, I mean) is the foot.

PS: I was editing maybe later, after testing these strings Repeat '/ live.
Did you find this review helpful?yesno
»
Read the 6 user reviews on the GHS Flea Signature Bass Boomers »

Other categories in Bass guitar parts and accessories