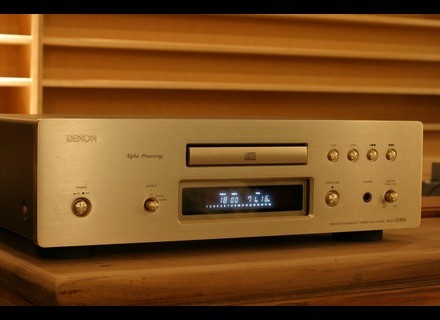 Denon DCD-S10II
5
I’d been after a good CD player for years, and had tried a huge number of models along the way.

I don’t like buying something without knowing it well, so I had to have a practical experience of it before buying.

But while this series of tests has allowed me to determine my own preferences, I had to admit that the quality level that I was after was often either out of a reasonable price range or distributed by networks offering too limioted a service considering the price.

And suddenly, a Japanese friend of mine (also quite present on the Accuphase forums) bought a DCD-1, which led me to develop an interest for that brand which is not considered a close match to high-quality Swiss-made ones and often sells with difficulty on the second-hand market (which means the prices are interesting).

And – that was a homerun!

The Denon DCD-S10II is very well designed. We’re talking of a product from the golden age of THDG CD players, with the multiprocessor-based tech that can be found on high-end CD players such as the Accuphase DP-400, DP-600, T+A CD-1260r, high-end broadcast products by Tascam or Esoteric stuff. Bref... A very good start, ain’t it? The player features a double mono, high-quality electronic, a copper antivibe boxwhich contains the mechanical parts, and the front offers the possibility to select if you want to use the player as a DAC or player (digital cinch in only). The player can also be turned into a preamp as the output volume can be set at will, or you can just plug it to the normal outs and it behaves like a normal player – but in a gold-plated version. Add two silver-pinned XLR outs (with a less-than ideal oxydation – as usual with such an audiophile sh*t). The screws are mostly classic, with also some copper ones (those leading to the ground). The front is made of 1.5-thick solid aluminium.

Yeah, that’s serious and the best that industry can produce.

8 years after it first circulated, the previous owner had the the laser and mechanical parts replaced. So it seems that Denon took the pain to ensure the availability of parts for at least that long: Wadia and Audio do much worse with players that can’t be repaired as soon as their warranty period is over.

My room is far from ideal for listening. It’s also my living room, so compromises had to be made. I intended to equip ot with many basstraps and sound absorbers to make it a dedicated listening room, but my wife wouldn’t have it. In the end, the highs are a bit faulty (should be more precise than they are). The problem only gets worse at higher volume, so all my tests were made at an average volume. I’ll still have to try it in a specialized studio near my hometown, but I’ll wait for new tracks worth the investment.

Very precise and defined, it builds all the sounds on an absolutely blank background. It reproduces all nuances, even the smallest ones. It has an incredible natural sound, which is particularly remarkable on calm and natural music. Folk, classical and solo musicians often sound sublime. But there is no real limitation to this deck. What I have mentioned are the styles that it sublimates, but it has the rhythm, grip, foundation and all the delicacy that we love in the transcription of music, and it successfully accomplishes all kinds of tasks. Being a lover of metal, traditional Japanese music, war and sailor songs, IDM, death metal, punk, pirate music (you name it), I get my money’s worth!

Overall, I have the feeling that the sound was adjusted to lower the bass rendering by 2db. While this frequency is perfectly defined in its nuance, it remains a little further back when played, while the mids and trebles seem sublimated and in place. I think it's a designer’s trick to really emphasize these frequencies: B&W doesn’t do otherwise with its diamond tweeters by lowering (pre-treble) the frequency by 3db. It allows the human ear to make room and better notice the treble. It is probably the same here. Overall, it does not hurt the foundation of the music, which is clear, neat and well-defined.

I also notice that some of the things which can sound annoying on some players do work here. The treble on some organ attack sounds by Alestorm, for instance, are extremely annoying and often force me to lower the volume, but it’s not the case with this one, and yet I retain the full structure of the sound and perceive the result as faithful to the master listened to large mastering ATCs. And yet, it's more listenable, less tiring.

In the end
----------
This player isn’t just great – it’s huge. For 350 bucks, it’s a great deal and will gice a final destination to anyone after THE sound. It can be an excellent alternative to the Accuphase DP-410, though this one chose a different path in its sound rendition compared with its competitor. The techniques used on the Denon are far superior by the way (more current, better filtering and transformers, all components are better in quality).

To be recommended, with no reserve.