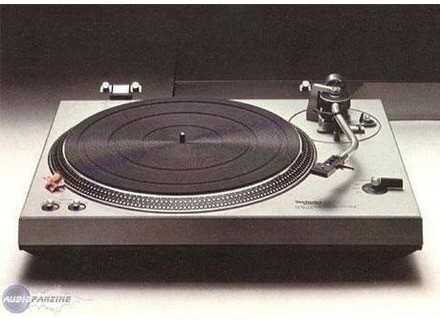 Technics SL-1500
I often appreciate the opinion based, but in this case I have to comment: The faults described do not affect the engine running or not, but different rheostat for adjusting speed: they oxidize with time, and the current flowing encounter more or less resistance on these traces, which results in changes in numbers of variables RPM motors .. Ideally, after the exchange of rheostat, or the product KF Contacts, and if you have neither one nor the other, it's just elbow grease: You must re-honing contacts soliciting strongly in-as was the barrel-a some time.
This is also valid for the volume pots or other ...

334 prods's review (This content has been automatically translated from French)

Technics SL-1500
2
This plate is oldschool. She came out in the years to 70/80, and of course it is produced.
You can find it used, but 160 would be cowardice ** er enc (50/60 to +)
Ngatifs Points: rglage the pitch (cho, 2 small buttons next to the Lumire orange, but it is quickly sy), the engine (mine must be old I think, because I ke a little touch vynil accelre engine, which makes the timing cho, so drop the mix or scratch) ..
Pros: the quality of matrial is a technics koi ..
But hey, do not buy AC, except for fair play discs, ...

Body1967's review (This content has been automatically translated from French)

Technics SL-1500
5
I have a Technics SL-1500 turntable for about fifteen years now. I fell for this model that has the same drive (direct drive motor) than the SL-1200. The arm is also very good as well as depreciation all that part of the chassis, the deck also survived 4 moves! Only problem encountered throughout the years, the poor quality of the switch OFF/33/45tours (bad contacts), which can sometimes cause changes in speed (especially if you have not used the plate for some time). The speed control with strobe is sometimes tricky, and I understand that some beginners are a bit lost with this kind of setting.

Technics SL-1500 manuals and other files