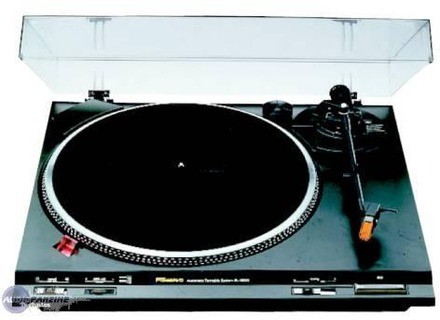 Technics SL-BD22D
I've used this home turntable for about 5 years.
Like all Technics, it is very reliable and solidly built, on the condition that you use it for what it was conceived, which excludes DJing, of course.
It's my first turntable and I'm very happy with it.
Granted, it's low-end from a low-end brand, but it sounds fine and the mechanism is solid, which is crucial. The value for money is very good.
I would buy it again today without hesitation, especially given its secondhand price!
Did you find this review helpful?yesno
»

Technics SL-BD22D
I've had a technics SL-DD33 for 10 years
I have never replaced the belt, it works perfectly.
The advantage of this turntable is that once the stylus has been adjusted correctly, it places itself automatically on the record (45 rpm, 33 rpm, or EP) and the tonearm goes back to its initial position once the record is over, everything just by pushing the Start button.
A Repeat button allows you to play the same record several times.
I bought this turntable back then because I had an electrophone and sometimes had problems finding the groove and sometimes missed the record.
Another thing: Once correctly adjusted, I have been able to get successful results 99% of the time and the stylus is placed automatically at the edge.
In case of failure, this turntable also has a manual button.
The speed is regulated automatically, which is a good point.
Unfortunately, I think the quality of the styli has deteriorated through the years. In the beginning, I used Technics T4P styli (1 per year), but the brand stopped manufacturing them and now they last less (6 months).
New styli sound great with this turntable, but after several months you can start hearing crackles and the sound is less clear from the point when you start cleaning the records with alcohol, the crackles are heard with a used tip, but less so with a new record that hasn't been cleaned with alcohol.
This turntable is very good to listen to your vinyl collection, but not for scratching like a DJ.
I recently bought a Koolsound turntable and it sounds very good, especially with ORTOFON cartridges and styli, and they last very long. But it doesn't stop when the record is over, nor does it have a repeat function or automatic positioning. A bit more restricting.
Did you find this review helpful?yesno
»

Technics SL-BD22D
5
This is a review of the Technics SL-BD22 Turntable System. I had also inherited this from the basement. When I first started producing, I realized that if I wanted to be like Kanye or Scott, I would need to dive into a major part of production: Sampling. I had always been skeptical of turntables because I had assumed that it was be too hard and too time consuming to try and figure out how to connect a turntable to the computer.

I was told that I had to start sampling if I didn't want to sound monotonous, so I decided to snatch this from the bookshelf in the family room and bring it up to my room. I was full of doubt that I would actually get it hooked up correctly because I thought that it was old and dated. I turned the turntable around and saw a little red and a little white port. Yes, RCA was built right into the back of this turntable that I thought was older than fire. I grabbed my handy RCA to 1/8&quot; cable, and away I went. I was surprised at how easy it was to get this to work. I even got it to work on my HP laptop.

For those out there spending a hundred or so dollars on a USB turntable, you're wasting your time. If you have no audio setup whatsoever, but just a computer, this will work for you. Shell out the couple dollars for a RCA to 1/8&quot; cord and you will be putting records into your DAW in no time. I had believed that it would be far too hard to get this to work and I was wrong.

First off, the simplicity of this turn table is one of its high points. If you move the needle towards the record, it'll start spinning. Put the needle back in the cradle, and the record will stop. It's a belt-drive turntable though, so it will not be the choice of a DJ. However, the belt drive is ideal for sampling because the belt-driven motor will compensate for microvibrations that would otherwise be picked up by the needle.

In terms of features, it's an easy turntable. You can stop the record by holding down a little button. Let the button go and the record will start again. A little slider will choose between 45 and 30 revolutions-per-minute, and you can fine tune this will a little slider to increase or decrease overall pitch. There is also a cue switch.

To wrap this review up, I have to say that I enjoy this turntable, and was surprised at the ease of use. Don't be fooled by USB Turntable manufacturers saying that it's the easiest way by far to get records to your computer. This is not true. All you need is a cord and you're good to go. The needle is a snap to replace as it just pops off of the arm, and they're relatively cheap, too. I really enjoy this turntable.
Did you find this review helpful?yesno
»