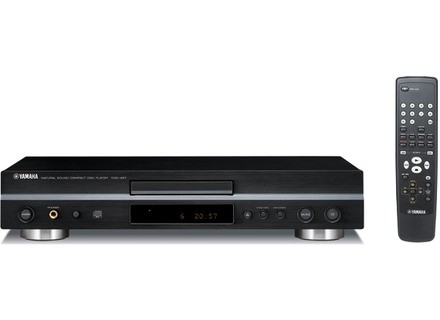 Anonymous 's review (This content has been automatically translated from French)" What more?"

To be brief, this player is very fast, reads all formats including data discs containing MP3, very convenient.
It is superb titanium version is slightly purplish steel.
His excellent.

Go for it, I do not see what more can offer more expensive models ...
Did you find this review helpful?yesno
»

Loony's review (This content has been automatically translated from French)

Yamaha CDX-497
4
I've had two weeks, bought for its many features, versatility and price friendly.
This is the first Yamaha CD player to have in my possession. Before this one I had three Sony CD players and a Denon 90 years I've forgotten the references, they have not held more than two years. It only remains for me that my two old and strong Pioneer CDJ-500 at that time.

Most of this player:

Not essential but handy, mp3 CD playback (32 to 320kbps and VBR) and he does not fully addicted, navigation in the files is simple and intuitive. It can also play WMA files, functions as I have not tested since I do not use this format. Some people may enjoy having more than 8 hours of music per CD.

It reads as smoothly Controlled Copy protected CDs. Good to know for those who have this kind of CD.

The many features "normal" CD player like the shuffle for example, often feature on DVD players missing or unusable without monitor / TV (no direct access in remote and facade).
It is also possible to adjust the output level via the remote handy to avoid getting up and touch all the time the pots of preamp or amp, especially with my two blocks Dagone800. It is this function that little bit extra, that motivated my choice for this Yamaha.
The maximum output level is 2V, as my CDJ-500, normal what.

The audio quality of a CD player.
I am not audiophile and above a certain price I have never heard of difference "surlecutante" between two CD players. on the other hand I would not say the same with some DVD players vs CD.

The price, 321 CHF (195 euros) in Switzerland with shipping, it was worth the money.
The least of this reader:

Like many other such devices, the majority of functions are available only from the remote so big problems into perspective if you break or lose the remote.

I lack experience to know if this drive is reliable, therefore, impossible to say whether I would do it but if this choice is given and what it offers then yes, a choice again without hesitation, great value / price.

Edit 2011:
4 years of very moderate use and the problems begin.
The tray closes soon arrive at an end after opening and, without surprise, he can not read an entire CD without skipping ...
I leave the screwdriver, I unpacked it all, once alcohol on the lens 90, a sudden spray of contact sensors 60 in the drawer and ... More jump in reading, the drawer is open, but closes as soon as I put the CD on it (closes the first little "shock") but the key is saved! Whew!
The optical KSS is a 213c, the standard Sony brand that I deeply conch but definitely seems inevitable in this type of device ...
Did you find this review helpful?yesno
»