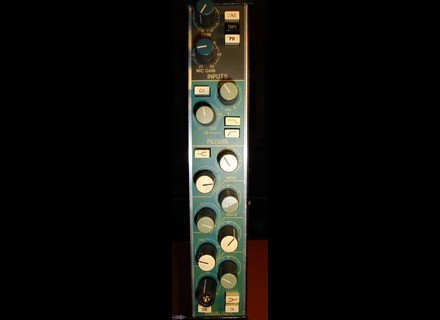 Neve 8108 Channel Strip
5
This is a channel strip (mic pre, compressor, eq) made by Neve, originally as part of the Neve Consoles. They've since been taken out of consoles and sold individually by collectors, as the pre-amps alone are really valuable and in-demand. This is an analog strip, as it goes back to the pre-digital days of yore. The one that I used was in a custom-built console which used different mic pres, some of which were Neves. I don't know what the connection was as I didn't ask but I am sure that if you bought this mic-pre outside of a console it's have XLR connections.

Getting a good sound with a Neve mic pre of any kind should be really easy to any competent engineer. This one is no exception. This mic pre sounds phenomenal, and getting the right sound is as easy as taking the time to find the right mic placement. The mic pre contains a trim and gain knob on top, followed by high and low pass filters which can be activated via a switch, and followed then by a parametric four-band EQ, which can also be activated or bypassed via a switch. There is a phase reverse control as well.

This is a great sounding pre-amp. As its older and not as clear as the newer mic pres, it's not the most transparent mic pre I've ever heard, but that's no complaint. In fact, it tends to make everything a little warmer and fatter for the most part, if it changes anything at all. Plus, the EQ on it is phenomenal. It somehow seems to amplify only the good parts of a signal. It basically makes things sound incredible. I know that some people prefer not to EQ right away but I couldn't help using the EQs at tracking, as they brought everything out so much.
I haven't used this with a tape machine, so I can't comment on that. I know that in Pro Tools, these still come out sounding great, even if they predate the software by about 30 or so years!

I was reminded at the absolutely stellar quality of Neve pre-amps when I used this, but I also found quite a treat in the EQ and filters on this thing as well. I don't think I'll get to use one again until I go back to the studio that has the console, but I plan on doing that as soon as I get involved with a project that has the budget for it. I highly recommend this channel strip.
Did you find this review helpful?yesno
»

Neve 8108 Channel Strip
5
The Neve 8108 Strip is an analog based channel strip with a preamplifier and parametric EQ. It normally lies in a Neve 8108 console, but has been known to be racked up and used as outboard gear as well. The connections vary - if you find one that has been racked up by someone, it usually has 1/4 inch or XLR in ands outs, but it could be any number of connections, depending on how it is boxed and/or racked.

The set up of the channel strip is pretty basic, with the trim and mic gain knobs on the top for controlling your input level. It then has a series of parametric equalization knobs that each controls a different part of the frequency spectrum. I don't have a manual for this, and I'm not even sure there is one, except for the 8108 console as a whole, which would probably contain a section about how to control this part of the console.

The sound of these preamps is fat and definitley has that classic Neve tone. It has girth to it and it will definitley reproduce your microphone well. While it won't color the sound really, it does have a distinct tone, with a fat low-mid end presence that makes for a truly rich sound unique to Neve. The EQs are also great as they have a deal deal of versatile and are quite clean sounding. They are easy to use and I use them both for tracking and mixing. Overall, the 8108 has that vintage Neve sound that is so sought after by engineers.

I've been using the Neve 8108 strip for about a year. I love the sound from these, and can't say enough about Neve in general, as they are the king when it comes to mic preamps. If you can find these out of their console, the price is usually pretty reasonable and probably worth it as you'd be getting a great preamplifier as well as a great parametric EQ. All in all I love this strip and recommend it to anyone looking for a high end channel strip.
Did you find this review helpful?yesno
»

Neve 8108 Channel Strip
4
4-band active eq paramtrique analog - ultra flexible and intuitive, with a gradual color trs incisive when you push the frquences whether boost or cut gain ... the line level is served by a pre amp gain with a wide dynamic range ... great - just know that they must maintain their capabilities change some before use and that food should be clearly Designed for good performance of the signal-noise !

depending on the state of the slice ... irrprochable dynamic and efficient color-frquencielles obtained

especially on a Tack Amek Scorpion ... and if I have a great practice EQ plug-in (Sony MtricHalo URS and other ...)