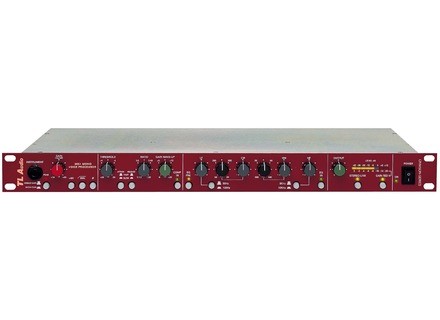 TL Audio 3051 Mono Voice Processor
5
The TL Audio 3051 is a vocal processor channel strip, consisting of a mic preamp, a compressor, and an equalizer. It's a solid state based piece of gear and I can't say if this would work well for anything other than vocals since I've only used it to record vocals. The box has XLR and 1/4" inputs and outputs and also has auxiliary jacks and a sidechain option. There is also a 1/4" input on the front panel for plugging your instrument directly in. It is rack mountable and will only take up a single rack in a traditional casing.

The configuration of the TL Audio 3051 allows for a lot of flexibility and there is a good amount to work with in general. The mic preamp has options for phantom power, a high pass filter, and a polarity switch. The compressor has parameters for threshold, ratio, and gain make up, along with buttons to set the attack and release at either a fast or slow rate. The EQ consists of four bands, with the highest and lowest bands having two fixed frequency options and the middle two having more range to choose from in terms of frequency. Lastly, there's an output section that has gain reduction and an output leveling knob. I haven't seen the manual for the 3051, so I can't speak to it's make up.

The TL Audio 3051 is capable of capturing all sorts of different voices, as the array of control to work with is definitely impressive. I've used the 3051 only for a few different male vocalists, but everything has always sounded good through this box to me. It's really a clean sound and doesn't break up the way a tube preamp will, but it's got a nice sound to it all the way around for sure. Each of the individual processors are really best suited in context I believe, as they all seem to have a similar type of tone quality to them. The compressor and equalizer are definitely helpful, but I wouldn't rely on them too much...

It doesn't seem like they're making the TL Audio 3051 vocal processing channel strip any longer, but it's definitely still a relevant piece of gear in my eyes. It would be great in either a home or professional studio setting, but probably fits in best in a home studio where someone would be doing a lot of vocal overdubs. The 3051 is a very clean sounding channel strip that's definitely worth knowing about for home studio owners looking for a vocal piece on their front end...
Did you find this review helpful?yesno
»

Very easy to use, excellent sound

I use since 1997 for various projects without any problems.
Did you find this review helpful?yesno
»