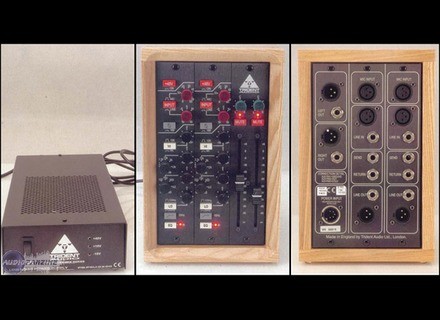 All user reviews for the Trident S80 producer box

Configue simple
Obtaining sound depends on the rate of gain induced under the source, then refining the EQ, this will vary greatly depending csqt by the microphones

While I was well prepared for this "rock legend", the sound is mid-rangy

This line sounds like a strong table Trident Trimix.

- The most: a subtle character, lots of headroom, the principle of a pair (taken stereo)
- The least: just a little side préampe

Quality / good price if it is the upper limit of the budget
Without equaling the MTA and other flagship brand, these units provide a versatile finally his English, with an EQ section to be full.

Gives much wanted to record with the seedings!

Trident S80 producer box
5
From a manufacturing point of view is very serious. Food is great is heavier than the module ... At the opening of the carton is a good sign. The set is quite nice and the wood is reminiscent of the original version of the trident.

Originally this product box, about 3 years ago was sold at between 3500euros 3800euros. Purchased from Funky junk to 1500 euros as well say that this is one of the best acquisition studiocsd.

I will not make a history of S80 those found on this page to know the reputation of Trident.

One wonders the true sense of the presence of a stereo bus. in reality it is quite handy because you can insert the module patch in two ways. Direct output to converter for making and using the line input and output bus to the mix. we can manage to take the stereo preamp input and load by adjusting the output.

The knobs are of high quality but the only gripe is the lack of markings on the buttons EQ more readable. If not use it smells just how serious hit.

I use the studio several types Chandler TG2 preamp, and those of the Neve1073 DXB200 mackie. The S80 EG without his party turned to the rather mild in the high end, very, very nice. The medium is very well detailed without staining (contrary to what one might think), the bass is very round and detailed, frankly we are not far from the behavior of a Neve 1073 on this point. The preamp actually sounds good English.

The EQ section is a marvel. I find the idea of ​​a Neve but more marked in the upper midrange but can not as hot as 1073 in the lower midrange. Up to 12kHz spectrum is a bit more aggressive but very comprehensive preamplifier. But KM184 are virtually transformed into KM84.

Frankly my TG2 is a little more rock when I drive the input (but both more clean than the S80 when I reversed the rule.

Finding nothing to say really negative. This is one of those machines that make it more beautiful everything going on inside.