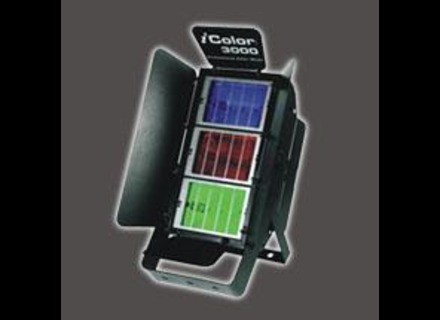 Acme Light iColor3000
3
Powerful (2400W continuous), compact and solid, ACME has the iColor3000 as the big brother of PRO and ICOLOR4 iColor3, and intended especially for TV and theater.

They are not distributed in France, but I could buy two in Belgium at http://www.evsound.be at a price close to that of the ICOLOR4.

The principle is the same as the ICOLOR4 distributed under several brands and names. In fact it looks more like the iColor3 projectors with 3 "garden" in line.

Its three projectors are more powerful, 800W, and tubular lamps R7S use the same format as other iColor but less common.
They are also dichroic colors red, green and blue.

A separate box attached to the back houses the electronics and has a red 4-digit display, 4 buttons to operate in many menus available and four LEDs to indicate status.

The menus, there are of course the choice of the DMX address from 1 to 512, the choice of mode 3 or 4 DMX channels, or on the music and in this case as a master or slave, and many other functions.
We can even reverse the display to read comfortably when the projector is positioned upside down.

A screen shows the extensive possibilities of the device and how to get them.

The big news is that iColor3000 is controllable in 3 DMX channels that directly control each projector, which allows him to work in three-color additive, which unfortunately could not make her little brothers.

So in principle it is capable of sending any color at any time.
It is his main interest, and it is controlled very easily with a traditional console without incurring distribution bizarre 4 DMX channels of his brothers.

It also presents the same defect as his brothers, the color of the beam very wide range of its edges where it gets progressively white. In contrast, the marginal halo appears to have the complementary color.
Small consolation: the 3 lights are aligned, the side flaps can effectively reduce the width of the beam and hide the discolored area in one direction. The halo is visible in the other direction.

Personally the difference in color on the edges has never embarrassed. If she actually sees on a white screen uniform, it is much less visible projected onto a surface varied, and I learned to direct the beam so that it no longer noticed.

ACME has chosen dichroic clear enough to support the light power at the expense of color depth.

It's not embarrassing for the red and green are acceptable. As against the blue is pretty clear, and I preferred a more robust color even if it means less power.
In any case we should not expect miracles in blue with halogen lamps that do not produce.

It is possible to have white by sending three beams thoroughly. One can also have a white hot by reducing the blue, but difficult to get a cool white.

Another shortcoming: the central fan is noisier than the 2 small ventilos ICOLOR4, which would use out in a quiet atmosphere.
As against concert lighting, the sound of the sound system should largely cover the ventilation.

That the DJ and other amateur-effects pouet pouet rest assured, the machine is also capable of operating in the same ways that his brothers, or 4 DMX channels with full compatibility, or in auto mode on the music, master / slave, etc.., and using the same small dedicated controllers.

For that it has a microphone, a knob and a jack for foot pedal, and menus can choose these options.

I have not had the opportunity to compare the accuracy of the colors with those of my ICOLOR4. I'll talk about that later.

The shallow depth of blue and fan noise makes me wonder about the use that I will make lighting concert:

Wash-or three colors to illuminate the broad side of musicians,

-Either-way squeaker squeaker in sync with my current 2 ICOLOR4, I will test on the dancers at the next music festival.

The disadvantage is that you can not change the management mode of the projector from the console, which can be done only through the menus available at the rear of the unit.
Did you find this review helpful?yesno
»