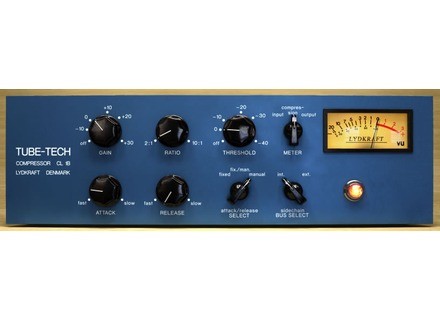 Average Score:5.0( 5/5 based on 5 reviews )
Not satisfied with those reviews?
Our members also liked:
Editorial review
Users reviews

Softube Tube-Tech CL1B
5
The Softube Tube-Tech CL1B is a plugin emulation of the original hardware unit by the same name. The hardware compressor has been around since 1987 and was created in Denmark as an updated LA-2A opto style of compressor. It has a legendary reputation and a starring role as the go to compressor in many top studios around the world, so it's easy to see why Softube decided to make a plugin to mimic the hardware. From the beginning, installation is straight forward although you do need an iLok to run the plugin...and the less said about that the better.
Anyway, once you have everything up and running in your DAW the configuration is very simple and the GUI is exactly the same as the hardware unit and beautifully done, infact you'll probably spend the first 5 minutes foaming at the mouth at how good it looks but of course it's not all about the looks, luckily though it sounds even better. The manual should be briefly consulted to get yourself familiar with the 3 different 'attack/release SELECT' sections, or you could just take my word for it when i say;

'Fixed' has an Attack time of 1 millisecond, and a Release time of 50 milliseconds.

'Manual' allows the user to set the attack time from 0.5 to 300 milliseconds and the release time from 0.05 seconds to 10 seconds.

It also features a side-chaining option like a lot of other compressors, the manual has a section where it gives settings to try for different applications such as vocals, guitars etc and this could be a starting point for new users of the CL1B.

Upon opening the plugin in your DAW, the default setting will have the attack and release setup on manual selection which means the user can control the attack and release settings over the left like a normal standard compressor. The ratio ranges from 2:1 up to 10:1 so it is fairly flexible in this department. For a lot of standard compression jobs like bass, piano, guitar and vocals - keeping the ratio, attack and release knobs set to around the 12 o'clock position gives some nice consistent results that are transparent yet a subtly 'goey' and 'gluey' feel just like a good analogue compressor although not quite as strong. On vocals and bass, the CL1B gently and smoothly caresses the signal with modest attack, release and threshold settings, to sit perfectly in most mixing situations and is clean enough to use on voiceover tracks if used with 2-3db of levelling gain reduction.

The performance to CPU usage ratio is excellent, you can safely run multiple instances of the plugin in 1 session along with other EQ plugs and VST's you would normally use as well without any straining of your computers processor. The Tube-Tech CL1B is ultra friendly in this respect i've found while using a macbook with 4GB of RAM on OSX 10.6.8 in Logic Pro 9. It's as stable as a horse's home.

One of my personal favourite uses of the CL1B is for adding an extra bit of saturation to electric guitar tracks. Put the CL1B on an aux send track to use as a parallel compressor and for any 'Big' choruses or moments when the guitar should be front and centre, then automate the guitar send level generously until you get about 10db of gain reduction from the CL1B and make sure to have the threshold low and the attack/release SELECT at 'Fixed' which will grey out the attack and release knobs and listen to the extra bit of crunch and power it adds to the guitars when blended in with the original tracks. This can also work on vocals, bass, keys, synths and drums. An excellent Parallel compressor with great character when pushed. I would buy the Tube-tech again and again because it really is that good. With new plugins coming out left, right and centre every week it seems, it can be easy to forget how impressive the results are from this plugin which has been around since 2009, but in terms of sound quality the CL1B is up there with the very best along with it's user friendly GUI and classic settings, you really can't go wrong with it and with a price tag that is 2 grand less than the real hardware unit - it's a no brainer really if you have the 200 dollars to spare.

The iLok issue does put a dampener on an otherwise amazing plugin of the highest quality, but looking past that i would recommend this plugin to anyone who works primarily ITB. It's silky smooth, opto sound works a treat on many instruments and works magic on vocals, which is my personal favourite use for it. Having not used the hardware before, i can only go by what other engineers who have experienced the hardware have say about the comparison - and it is mostly all positive opinions on that matter. Mix engineer Tom Elmhirst uses the hardware Tube-Tech CL1B as one of his main compressors and with credits like Adele and Amy Winehouse's biggest hits to show then that says a lot about the quality of the unit. Attack Magazine rated the CL1B in the top 20 compressors of all time (number 4 to be exact) and state that the Softube CL1B plugin is one of the best emulations ever made. The link for that article can be found right here if you wish to look for yourself - https://www.attackmagazine.com/features/top-20-best-hardware-compressors-ever-made/17/

So if you are in the market for a top digital compressor with a clear and engaging layout based on time-tested classic hardware, then the Softube Tube-Tech CL1B should be one of your purchases. Don't think about it, just get it.
Did you find this review helpful?yesno

Softube Tube-Tech CL1B
5
Since I have used the Softube Tube-Tech CL1B on a machine where it was already installed, I wasn't involved at all in the installation process.  I can say however that since I have been using it it has functioned properly and I haven't had any compatibility problems or other issues.  The interface of the plug-in is extremely easy to follow, even if you don't have experience with the hardware version of the CL1B.  The plug-in simple has parameters for gain, ratio, threshold, attack, and release, and also has switches for metering, bus select, and one to choose if the attack and release will be fixed or manual.  Since the configuration of the interface only contains basic parameters that are seen on most compressors, unless you are having problems installing this, I don't think that the manual is needed.

In the time that I have been using the Softube Tube-Tech CL1B plug-in, I've been able to get some pretty good performance out of it.  I have been using the plug-in on a Pro Tools HD system that runs on an Apple G5 desk top and I've never had a problems running a number of these within a single session when I want to.  This being said, since I haven't run it on a Pro Tools LE system (or something comparable), I can't really say how well it will run on a non HD system.  How fast or slow a plug-in will run really depends on the system that you are running it on.

Overall, the Softube Tube-Tech CL1B is a great sounding plug-in that is incredibly easy to use.  While it doesn't sound as good as its hardware counterpart, it still has a great tone and is an easier and cheaper way to get this sort of tone.  The price is pretty reasonable and I always love having the hardware interface look inside of a plug-in as I find that it makes it easier to use and is overall more user friendly.  If you are looking to add a great sounding compression plug-in at a reasonable price, regardless of if you are familiar with the hardware Tube Tech CL1B, you should definitely check out this plug-in version.  I would also compare this one to the TC Electronic CL1B plug-in as both are comparable.

Softube Tube-Tech CL1B
5
Installation nickel. Softube program allows us to select what you want to install. At run time, no problem. Simply must have the iLok

Relatively greedy. Let's say that after a few tracks loaded this plugin, my computer is struggling a bit compared to other compressors, particularly those from Waves.

However, no bugs, very stable and good answer.

Many colors and "gratified" lean tools. Great for guitars or synths stunted anorexic.

For drums, a little less so. Low frequencies are too fat to see soft for my taste. For bass, ditto: can go round in an instant. Then depends on the desired effect.

Softube Tube-Tech CL1B
5
Can not say, I tried it on a system where it was already installed.

Let us come before it. This compressor is very colorful, it provides warmth in the mids. It is still quite transparent compared to other such qu'un1176 of variety and density of sound (simulation fairchild). But the color is there. It erodes still a bit low, but to bring out the low mids. I have nothing better to put a bass in a mix in just a few seconds. It brings out the bass in a perfectly controlled (dynamic and clarity) and with adequate heat without drooling or be crushed. The voice he brings out the mids not seem muddy, it shows the dimension "throat" of the vote but in a smooth, almost as if it was out (but subtly) the harmonic basis of the song.
It is very (too) expensive. But I think it's a good investment. Maybe one day I'll buy ...

pilip's review (This content has been automatically translated from French)

anyway this plugin uses a little more than the Waves API example. (But not as a convolution reverb)

- I never used the rel CL1B so I will not comment on the quality of the formulation in itself, although it does seem to have cre with precision, Softube has published a video here:

- This compressor very quickly is dramatically ragit! it is heard even Minimizing low. He quite frankly I work tonn usual with the Waves API 2500 comp, but this is simply not comparable! cl1b the feeling is so (even with a long attack and short release) that I sometimes go back on prfrer API for a more transparent RESULT. I think it's untamable and I plan to tame the beasts in the coming weeks, but it's true that surprised me, I do not know if the original has the same pdigre but we are dealing here a compressor that an A veritable personality (rare for a plug)

In any case, the very good plug-in is a box Softube that I enjoy more.