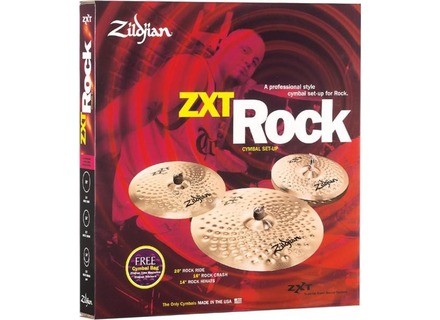 ZXTR4P, Cymbal Pack from Zildjian in the ZXT series.

Zildjian ZXTR4P
5
This is the kit ZXT rock, with Charley, Crash, ride, comes with a bag, but not good quality but hey trs is better than nothing and adpanne, there is no need to buy one when it is not.

I use it for a year now.
I love the big fat well, although rock, same farm, HH rock sounds, but I think it is best expressed ajar.

trs are bright, attention to the ears. If the scratch has no big bottom amp pousss means more than the cymbals, especially the crash. The ride sounds good, it a good ping Dfine, that stands out. They have good sustain, without too much last as long, just enough.

I hit it like a real nag, and they are always impcablement intact. As against this, can not play anything but rock / mtal to reggae, was not even worth thinking about, it was also to have that I love, the kit is made for METAL AND ROCK! and that's it! for jazz there not even think they have no subtilis even hitting them gently, they sound strong!

UNBEATABLE price quality ratio! I pay 450 or 500 in allemaqne and for that price I had a complete set, even when it lacks a 2nd crash a little bigger, but that's for later. I do it again without hsitation this choice, even if Z The series is best, it is also much CHRE and not affordable for my budget.

This kit is for professional quality. I put 10/10 because I find really no default for a kit that price l.
Did you find this review helpful?yesno
»

lars ulrich Jr.'s review (This content has been automatically translated from French)

Zildjian ZXTR4P
5
I too am of the Azores with my friend down lol, it's pure zildjian. A well rock big sound even. I recommend: Rap Calita unbeatable price compared to sabian pro!
But just a little dtail, I'm a bit of the ride but the hi-hat and crash are irrprochable.
Lars Ulrich (Metallica) does not use zildjian for nothing!
Did you find this review helpful?yesno
»

spacekiwi's review (This content has been automatically translated from French)

Zildjian ZXTR4P
5
- How long have you use it?

They have a clarity and precision in the sound of thunder enough for the price! They have an enjoyable and relatively trs touch prcis. They are quite heavy but not too much. The cover is very well supplied with, Molton, but there is no pocket rods, shame ..

I tried the pack "Sabian B8 Performance", to the same low price prs (315). See anything! Sabian's have no sound, no precision, no clarity .. The Zildjian (350) are MUCH better, they have a brilliant and suptile (they are heavier too). Just compare the look, the Sabian they look like Fisher Price ..

Simply: EXCELLENT !!!!!
If achte sparments cymbals, a cost of 80 euros + (not counting the cover provided with)

For this price a must!
Did you find this review helpful?yesno
»

rectomite's review (This content has been automatically translated from French)

Zildjian ZXTR4P
4
-How long have you use it?
About a year and a half
- What is the particular feature you like best and least?
+ + + They are very strong, and I play metal, so for me it's an essential!
=== The sound is fair, effective sound crash, a ride I got lgrement too sharp but will appeal to rock fans of Rage Against The Machnine and a charley terrible when it is open , idela for me with the double pedals ..
--- You can not stifle the crash, by typing it, it makes a noise that tle strike m'enfin .. this is just dtail ^ ^
- Have you tried many other models before acqurir?
Yes, a pack of Headliner (by Meinl Distibution) Basic, just for beginners
- How do you report qualitprix?
Just OK, at least when I bought it so silent 450, now in the 400, I would give a score of 7.5 out of 20 for the report qual. / Price
- With the exprience, you do again this choice? ...
Can not be too rock for me to play metal, but I recommend it to all of the same rockers!
Did you find this review helpful?yesno
»