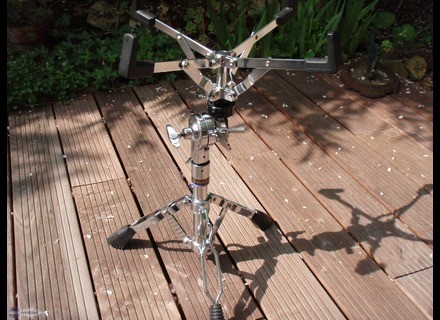 I needed a new snare stand, and was stuck between the Yamaha SS 840 and the SS 940. Seeing as how the price difference was only $5 Canadian between the two, I got the 940 for the ball and socket design. I payed $100.00 for it new at Long and McQuade (Canada).

This thing is heavy! It's VERY sturdy and solid. I also like the ball and socket feature, which allows for almost unlimited positioning and angle posibilities. It also has four arms instead of the usual three.

It doesn't go as low as I wish it would. Not really a problem though, I need a new throne anyway.

Like I said above, it's very heavy, solid and sturdy. The tubes are very thick and it is double braced.

It's amazing. It holds up to any style of playing. I definately recommend this to anyone looking for a new snare stand.