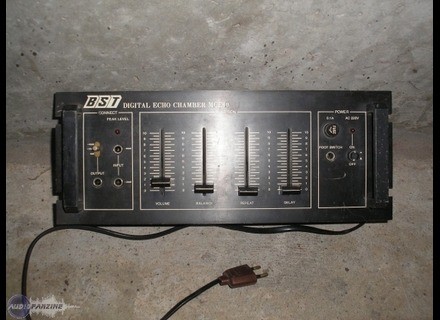 delayedbis's review (This content has been automatically translated from French)" exotic"

Not possible to compare with other systems, it is true that the sound that emerges is more than special,!

That's the little things we love, "it saturates, it blows everywhere" and it is safe

Fairly complete connectivity suitable for a lot of applications

Four faders and basta, why a fifth, that would work

it's dirty, it eats everything, it destroys, defaces it, any signal, always good to be on its way!

she is cute but downright noisy in any context

the interest is the combo with other delays, but difficult to use for some ç'est

unknown to me on the net and purchase? mce60 this so yes, I put the cover

BST MCE60 Digital Echo Chamber
4
The MCE 60 is as a unit specializing in analog delay and echo delay. It can accommodate a lot of constraints connections:
Insert the plug into console
The intercalated between a preamp and amp
The direct use with a microphone or musical instrument
And that no real limit combinations. But be careful, because this delay unit offers only unbalanced inputs and outputs on RCA jacks and 6.35 mm ..
It is equipped with an attenuator output voltage (0 dB, -20 dB and -40 dB). Input levels in turn can not be resolved by switch. However the MCE 60 has three separate entries, not mixable with each other: one at-50dB, a -20 dB (both 6.35 mm jacks on the front) and a final cinch to 0dB in the present time on the back of the machine. Add to that an ultimate jack called "Foot Switch" to bypass the effect and we went around the craft.

Four straight sliders can use more than simple. The first called "Volume" setting the level of preamp, the second called "Balance" provides mixing between the level of the input source and the effect itself. The last two faders referred to as "Delay" and "Repeat" settings allow delays and repetition of the echo ..

Difficult to give an opinion on such an aircraft. For breath, distortion and signal saturation predominate. The preamp is catastrophic .. The bandwidth of the effect is worthy of a phone .. So if you are looking for a box of tricks neutral and observing as far as it can be original input signal go your way!
This boiboite has only one simple goal, to go against all logic qualitative. Yet for some applications Lo-Fi it is difficult to find better and more intuitive. With extreme settings such as "Delay" and mini "Repeat" large loop on the system itself, and we get very very special effects see weird though not without interest ..
For normal use this machine distills sounds very interesting. For example by moving the fader quickly "Delay" we emphasize the reading speed of the memory and the effect is like hearing a tape played at a speed higher or lower than normal.

It blows, it saturates, it hums and completely distorts the original signal. No indication of time, no level indicator if it is a small red LED clip indicator that it will be fashionable to blush with pleasure! If you are looking to get audio in everything we try to avoid for decades, this little black box could well be the ultimate weapon of the Lo-Fi.

sinkmusic's review (This content has been automatically translated from French)

BST MCE60 Digital Echo Chamber
4
Echo / delay, so-called "digital", but the sound is closer to an analog delay (the signal becomes more acute when we shorten the delay time, he moved quickly into self-oscillation, etc.).
Rugged construction in a 2U format close
Jack and RCA connectors and
(Namely: the effects "BST" Gnrale are the same as several effects "Monacor", "Univox" or "MLOs)

No manual, 4 or 5 faders, that's all: very simple!
The long faders are quite enjoyable, a change of tiny knobs.
Also quite practical: the connector jack facade, RCA on the back, and various Impedance by type of instrument that one branch there.

I'm quite pleasantly surprised by this effect that I was not expecting anything: sound, cheap, grainy, wild is not one that can be cho Hoping for a "digital" and he also dmarque things "bucket brigade" analog 80s.
Certainly, it is not intended to produce crystalline delay or infinite loops, but to dub, lofi, noise, or create textures that go on feedback, expand or contract and self- oscillate, it is a tool of choice.
Designed to be used probably with a microphone, it also saturates very quickly if we plug in a synth or drum machine, which is not for me dplaire

I use it for several weeks, in conjunction with my other analog delays and numeric.
It finds its place among them because it has its own character and does wonders associated with spring reverb.
He leaves quickly into self-oscillation if feedback is mounted and Reduces the delay time, but is less pronounced than rsonance on things "analog" (I'm not sure if the TSB is "digital"), so you can easily find a place in a set-up of preferences in auxiliary, because the sound is quickly insert dirty (but it has to be loved) .
I feel that there is also a kind of ducking intgr (the effect is less pronounced when there is a signal "in", it is harder to play is stopped if) therefore still has the character gives it a pretty unique.