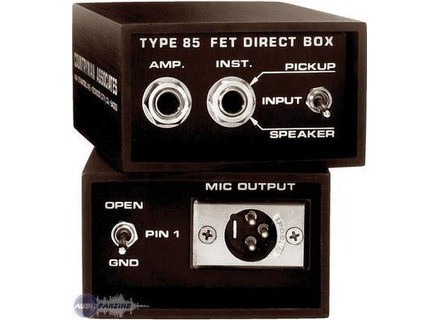 All user reviews for the Countryman TYPE 85 Direct Box

Average Score:5.0( 5/5 based on 2 reviews )
Buy this productView price information >
Not satisfied with those reviews?
Our members also liked:
Buy at Sweetwater

Countryman TYPE 85 Direct Box
5
This is an almost ubiquitous DI box, one that I have seen in many studios. It is an analog DI box. It has a 1/4" input, as well as a 1/4" output to an amplifier if you want to use it in tandem with an amp. It has an XLR output that is it's main output as a DI. It also has a switch to choose between instruments with Pickups and those that have speakers (mainly, a bass guitar or a keyboard). There is also a ground switch to use in case of getting excess noise, which I have rarely encountered. When I did encounter it, it was minimal and the ground switch eliminated it. There are no effects on this DI box.

I like the transparency of this pedal, as well as the ease of use. It's the most barebones DI I've used, and I love it for that. It's not really a bad price when you consider how much other transparent DIs can cost. The sound quality is superb. I've tried a few DIs but none that were as transparent. Highly recommended.

Countryman TYPE 85 Direct Box
5
The Countryman DI Type 85 is an analog direct input box with class A circuits. It has a 1/4'' input for the instrument and 1/4'' out to go to an amp. It then has a microphone output to send to your board or audio interface. Its not a rackable unit, its just a small box.

I've had mine for about a year but I had been using them in studios for a few years. The price is very reasonable for a top of the line DI box. You never know when a DI box will come in handy and it is great to have a good option for going direct if you don't want to use your on-board instrument inputs on your interface and if you don't have any external preamps. I looked into some Whirlwind and Radial direct boxes but I decided to go with the Countryman because I had used it before and was comfortable with it; it was also a bit cheaper than some of the higher end Radial models. Overall, this is a great DI box for your buck.