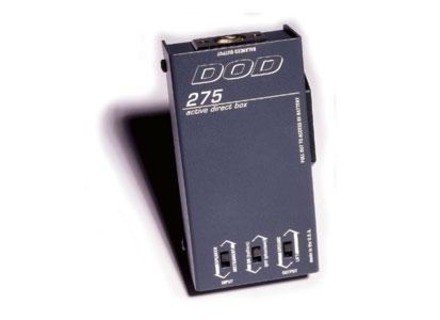 When compared with any other direct input box, the DOD 275 Active Direct Box isn't any hard or easier to use than any of them, but like all DI boxes is extremely easy to operate.  Simply plug in your connections and let it do its work.  I've never had any issues when using this DI box and it is really nice to have the switches that it does because it provides you with a lot of options to make sure that it works the best that it can.  I've never seen the manual for the DOD 275 Active Direct Box but you don't need to seek one out anyway because the unit is easy enough to use without one.

I'm always pretty happy with the sounds that I get with the DOD 275 Active Direct Box.  It is quite transparent and won't color your sound at all - it simply passes on the signal that it is given and does a great job at that as everything comes in crystal clear.  There aren't any effects or anything since it is only a DI box so beyond this there isn't much to say, but suffice it to say that this unit does its job well.

I've been using the DOD 275 Active Direct Box for about a year or so and while it isn't my favorite DI box out there, it does a great job and isn't expensive at all.  The price is very reasonable making it great for the home studio owner, even though it has the sound quality to be used by the pros.  Overall, a great choice for a direct input box for a number of different reasons.

The input is switchable Line (normal) / HP (high attenuation)
Battery ON / OFF (ghost) switch. No light ...
Switch to ground loop (saved my life many times!)

Remember to remove the battery during storage. Anyway, the use of battery is anecdotal. Works perfectly as a ghost.

In use for over 20 years. No problem is quality old!

Since I bought in emergency DI Samson, not sure they hold up as long ...

I would do the choice, yes, but I think it no longer exists ... Good value for money, even if it has become a bit expensive for me right now ...
Did you find this review helpful?yesno
»