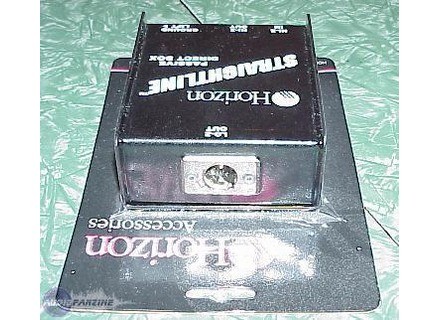 Horizon SL-1 Straightline
5
This is an analog DI box, one of the most transparent I've found that isn't boutique or really expensive in general. It works equally well for live and studio situations, due to this transparency. There are the standard features that come with most DIs. Obviously the box has an input connection (1/4") and an XLR output. There's also a 1/4" output that is also pretty typical overall. There's also a ground switch that one can flip to prevent noise, which is a common problem with these types of DIs. There are no effects on this DI box and it can't be racked.

This pedal couldn't be easier to use, just plug the instrument in the box, run the XLR cable to the pre-amp (whether it be studio or mixing board), and if you still need to amplify the signal, run it through an amp from the Hi-Z output. There's no need for a manual, assuming you've used a DI box before.

This is a pretty transparent console. Granted, it's not the most transparent, and what little coloring it does add to the mix is rather bland and uninspiring. However, most DI signals in the studio tend to be souped up with effects, compression, EQs, and the like. Plus, I tend to use it as a blend with an amped signal, which more often than not tends to dominate the mix. Thus, I feel like it can be a fine addition regardless of its tone. But let's be clear, it doesn't sound as good as most more expensive DIs do, even the transparent ones.

If you need a cheap DI that isn't noisy and doesn't color the sound, this is a fine choice. It's not the best but it's the cheapest one that is any good. In fact it's usually good enough for most instances. It's got a decent transparent sound and usually can remove all ground noise with the flick of a switch. I have used a lot of DIs and never really had to complain about any of them, but this was cheaper than all of the rest. Therefore I have a lot of respect for it.
Did you find this review helpful?yesno
»

Horizon SL-1 Straightline
4
The Horizon SL-1 Straightline is a passive direct input box designed for uses of all types. It is an analog piece of equipment that I have experience using in the recording studio. Like pretty much all direct input boxes, you could use this for live shows and in the studio pretty interchangeably I think, but my experience is limited to that in the studio so this review will focus on this application of the box. The SL-1 has 1/4" connections for both a high-z input and output, as well as a lo-Z LXR output, so as you can probably tell this is a pretty standard and straight forward DI box. It isn't rack mountable in any way...

Setting up and using the Horizon SL-1 Straightline is a very straight ahead process, as there really isn't anything to it. Once you've made your connections you're pretty much good to go, but there is a ground switch that you can use if you're getting noise. Beyond that, there aren't any parameters to work with, so I don't believe that a manual would be needed.

As far as direct input boxes in this price range go, the Horizon SL-1 Straightline is the best that I've used. Setting aside the price for a minute, the box sounds pretty good on it's own, even if you didn't know or consider the price. I've used the SL-1 for the standard DI applications of bass guitar and keyboards. The keyboard was a Yamaha Motif, and I should also mention that we used a bass amp in tandem with it for the bass guitar portion. We recorded both of these within the same session at different times with the same exact box, and for both we were quite pleased with the results...

If you need a cheap direct box that isn't completely worthless, the Horizon SL-1 Straightline is for you. While not the best DI box out there in terms of sheer quality, it still does reproduce your sound faithfully without any added color or noise. The price will undoubtedly drive people to the Horizon SL-1, and for good reason, so if you need a couple of cheap DI boxes, I'd encourage you to check these out for sure.
Did you find this review helpful?yesno
»