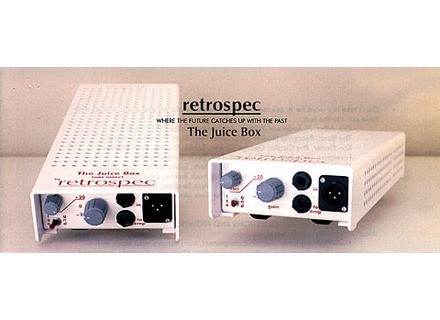 Sliding Delta Retrospec The Juice Box
5
Retrospec's The Juice Box is basically the perfect tube DI box for use in the recording studio. I've only used this box in the studio, and probably would recommend keeping it there since this isn't your typical cheap direct input box. The Juice Box has 1/4" connections for input and for plugging through to an amp, as well as an XLR output. I don't know what kind of tube is in here. The box isn't rack mountable as it stands alone.

Using the Retrospec's The Juice Box should be pretty straight forward for most applications. The connections are obvious enough, and it simply has a gain knob as well as a ground switch to work with. A manual shouldn't be necessary for using the Juice Box.

The tone quality of the Retrospec Juice Box is one of the best I've ever heard from a DI box. The sound is extremely warm and full, although I wouldn't say that it adds it's own color, it merely spits back an accurate portrayal of what you send into it. The only application that I've ever used The Juice Box has been for recording bass guitar. We also got an amp'd signal in addition to using this DI box, but the sound from the DI alone would certainly have been adequate if that had been necessary. I'm sure that The Juice Box would be great for recording other instruments as well, but I've yet to have the chance to try that theory out.

Only recently has Retrospec reissued The Juice Box, as it seems it was unavailable for many years, which is probably the main reason that not too many people know about them and why I only recently became aware of it. Hands down this is the best tube DI box that I've ever used and I doubt you're going to find one out there that's better. If you're looking for the ultimate tube DI, look no further than The Juice Box.