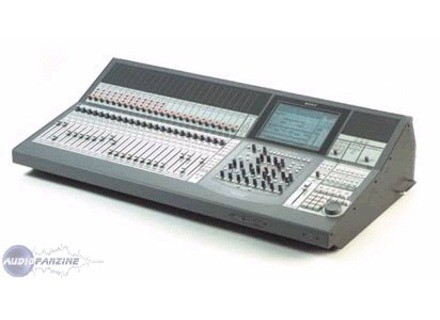 All user reviews for the Sony DMX-R100

Average Score:4.5( 4.5/5 based on 6 reviews )
Value For Money : Excellent
Not satisfied with those reviews?
Our members also liked:

Sony DMX-R100
4
The Sony DMX R 100 is a digital mixer that has everything you need, and I mean everything! My first time seeing this in person was a while back and I had no idea how to operate it. It was kind of confusing because its like a hardware that’s a software on the onboard screen. But once I fished through the manual a bit I understood the basic functions of it, and once I got that down I was good to go and never looked back. In one of the local studios still has this so I still have a chance from time to time to get to work with it. Sony has stopped making these though, after they never really produced a lot of them to begin with. I am not sure why, I am glad that I had a chance to work with this hardware though. It was unlike any other hardware mixer I have every used.

Not easy to use at all, it takes time to understand how things work and seeing all the menus and sub menus. You will need to read the manual, no mater how much you had manuals you will need to pick this one up unless you have someone else there with you that can teach you first hand how to operate this.
So don’t get this with the hopes of just plugging it up and just going with the flow like most of us do. I burned hours trying to do it my way before I finally gave in and picked up the manual.

Sounds are great, it will give you a very solid mix. Unfortunately most software can do the exact same thing this can do which is the reason you are seeing most of these type of units go out and never come back. Because software can be offered at a cheap price and has no overhead meaning they only have to create the program once and sell it a ton of times. Where hardware has to be produced and each unit cost. that’s why software is taking over mixers like the Sony DMX R 100

Overall, no complaints I love it. Its just a shame that its not being made anymore so don’t bother trying to get this at guitar center!

itchounet's review (This content has been automatically translated from French)" Great value!"

Sony DMX-R100
5
See below, mine has 2 cards and an AES card extra entries!

What strikes at first sight, that is the primitive appearance of the console software, my god it's like on Atari 2600 ... But that matter, what matters that is that is intuitive, and even if DMX is not as intuitive that a Mackie DXB home, browse through the menus becomes fun after a little training.
The routing is done without problem once that was understood the philosophy of the beast! The use of different effects are carefree, and the touch screen is rather nice to are using. However there is some dark spots: the operator not at all clear, the Mackie Control fonxtion difficult to operate, an internal memory too limited, the faders a bit loud, snapshot backups on disk ... So many things that make the DMX starting to acknowledge his age.

It is the console that Sony really is unveiled ... convertos quality is really great (to say what sonr the same as on the big console sony oxford), sound and breathing is very precise, it's nice to hear. The preamp base are also of high quality, because even if it does not make definitive catch for the new album of Celine Dion with, they can serve as a troubleshooting or additional preamp for a battery for example ... The effects (compressor and EQ) are quite nice, and pretty close to the Sonnox plugs actually ... The only criticism I will have to do the eq on that is that the screen is a little small to see precisely what one does, but hey that is a detail. Again do not expect a Manley Massive Passive on each track, we are talking about a simple fact eq taf its correction!

J 'uses this console for a few months. Before that I 'had the DXB (so much prettier but much more rotten), a TAC Bullet 28 / 8, as well as a mackie 1640 ... I have already worked on the Euphonix CS2000 and CS3000, Tascan DM3200 Yamaha DM2000 ... DMX is still al right now excellent value for money thanks to its unmatched sonic performance for the price argus. It is unfortunate look a little has-been with her floppy drive and its software from another age, but the fact is: it works and it sounds! What more?
In short I love this console, and I am not alone, I think DMX still has a bright future ahead of it ... It is such a shame that Sony has stopped making consoles pro ...

fabrice.fargues's review (This content has been automatically translated from French)

Use "Current" disconcerting ease ... Routing in, out, childish, Eq very well thought out, and the handling dynamics ... It's Sonnox (Sony Oxford), for aficionados of Plugg-in. Only automation is very difficult, not easy ... Too bad, it was nearly perfect in terms of intuitiveness otherwise ....

Its a great blender. We are in the entrance of upscale. Dynamics is observed, the stereo width is not breath ... I who was not really connected digital console, the Sony made me change my mind ... It has some flaws, of course, but in sound, we find the same feelings with an SSL or a Neve great time, it is wide, it is high, it's deep. In terms of dynamic treatments is very effective, but it's still digital, without browning. Regarding the EQ is musical, precise, and also without any staining, but much more effective than some Japanese consoles .... The personal dimension of sound can be given with some nice machines with lots of lights inside, the proud owners of "massive passive" or AD2055 (among others ...) know what I mean. The most obvious advantage is still the engine sound that mixes the 56 votes to "shrink" the sound and despite his age, while many digital consoles today, spent 16 voices one hears the sound is "close" the attack sounds "rounder" maintaining clarity ...

I bought it 2 months ago now, after working on it since its release in a timely manner. I tested DM2000, M7CL LS9/32, Sy48 (nice Innocason the rest ... But dear ...), Digico ... Digital for the live, practical, but for the studio, you have to put a price ... A beautiful table TL Audio 32 votes that DM2000 is cheaper and has far superior sound reproduction ... But on occasion, this console is a real bargain, a view of her, she always refers, and that is what he is asked first. I like it, coupled with a few machines severely gulps, "it restores perfectly what goes, and your sound is what you want it, and that, to me is important ...
Too bad that Sony has abandoned its division pro audio ", they made things more interesting, but the laws of the market and the PS3 have been due to the development of this console and its progeny that would have probably seen the day he is 1 or 2 years ... I remake that choice without a doubt, unless my wallet allowed me to aim higher ....

pa06's review (This content has been automatically translated from French)

Simple, especially if you come from another Japanese brand, or we're going too hard, not too small, not too hard ... Briefly, here we have the space and nuance. Touchscreen hyper intuitive. I worked one week on it before reading the user manual (which is poorly rdig I did well to wait

Used for 2 1 / 2 years. Enchant globally. One regret: that the digital and paved the jog / shuttle right at the bottom is no t dvelopp as promised by the manufacturer. It has a nice paved one digital and dial ... that serve nothing. Dbile and shame. One might logically be able to control Pro Tools and other recording ... hlas it is not. Ah, so it is best to use the update forthe software, it is more ergonomic. The first version did not save presets for eq or compressors or gates. Really console gniale the noise level and the touch screen is well thought out.

sebalto's review (This content has been automatically translated from French)

Sony DMX-R100
4
Well I'm the assistant and I tl form alone on this console and I hear other's comments rgulierement ing rule. Me I like the touch screen to navigate through the display settings. But the big advantage compared to the mackie D8B is that you do not have to go through this step: a panel knobs to adjust the old departures, returns, and dynamic filters : = a button function faster and more reliable. The big problem is that etween the routes remain open even with the fader down, as if the order had not t detects !!!!!! Going to believe a ralisations
The pramp trs well and we will share the prob faders a little temperamental everything is OK.