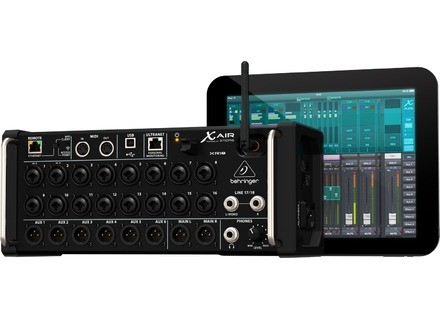 XR18, Digital Mixer from Behringer in the X AIR series.

All user reviews for the Behringer XR18

Behringer XR18
5
I am a videographer shooting 4 camera shoots of live house concert performances. I have always wanted a multi-track recorder. The Behringer XR18 combined with a laptop makes a great inexpensive 18 track digital recorder. I have combined this with a pair of ART S8 passive microphone splitter so I can drop it between stage mics and the PA snake and record all the channels. With careful buying I assembled this including 2 x 16 channels of snake for about $1,000 total.

The mixer itself sounds great and provides lots of audio processing power. Fully parametric EQ, compressor and noise gate on every channel. Four effects processors are good. The builtin WiFi is only so-so. I use an external WiFi router.

This biggest drawback is no control surface. You have to use a laptop or smartphone. I miss knobs I can grab to tweak the sound.

Rgxpod's review"A logical evolution for huge results ! Analog mixers are going to suffer while bands will love it."

Behringer XR18
5
I bought this compact gear as part of a sound system for my small, 5 to 7 band with several acoustic instruments, drums and sax.
I own the RACK XR 18 version. Really small, but a huge result.
The 6 aux sends to send whatever signal you want to monitors (I personally opt for the Ear Monitor, with added stereo

) although the headphone out to get the master signal could be enough in many cases.

The wifi sound management from the stage using a Samsung tablet or PC is great… I precise the PC software has a visual signal routing quicker and more logical compared with on a tablet, although the latter’s graphical resolution is better.
Otherwise, a PC with a 50 meters cable can do… No more hums emanating from low-quality multi-pair cables sensible to light dimmers…

Our rehearsal setup can easily be transported for small performances. The presence of effects, EQs and other useful features such as BBE or PULTEC emulations is great… Per-channel compression, FX sends… there’s plenty in it.

As a result, our entry-level monitors sound fine because we can “draw” a worthy equalization without losing one’s earing… Yet I still favor the Ear Monitor, as less monitors means more room available, less feedback issues and a better overall sound, plus the bright musician ceases to call for the sound engineer every 2 seconds or so to express his needs regarding his monitor (here, just DIY).

Recording our rehearsals or shows has become so easy…

My sole regret is the lack of any opening to something bigger. I wish there were AES50-style connectors to patch the ins so a sound engineers gets what he wants for his front signal, which makes all the difference with the 32 model…

“Caution, the XR18 tends to heat a bit even with its integrated fan”, so allow some room for the heat to evacuate properly.

At such a price… GO AHEAD AND GET IT!!! I’m not disappointed to have a USB interface mixer with “by MIDAS” that I can put in my glove compartment.
And frankly, it’ll soon be a real standard…

06/03/2015 update:
The latest software update is great, clearer and a more coherent routing with the PC version… Better GUI and it works better with my old Samsung S3 too.

It’s enormous! It’s so good that I’d do that choice again, or maybe I’d get a X32. Now that I’m used to some of its subtleties it’s great to be able to equalize each monitor with additional RTA to avoid feedback. Don’t look further: if it sounds bad, it’s either because of the band or your ears, not the gear.

Network use with a dual band ethernet & wifi router, which means :
- A virtual front engineer PC-linked with a 50m cat.5 ethernet cable, the whole for under the €100 mark – so no more heavier, bigger multi-pairs
- 5 additional connections from tablets with X Air Edit so everyone manages his own stage monitoring volume (but it’s more difficult for some, it takes a certain know-how, it’s an eternal debate between generations) – so no need for a €300 PM16 interface. I found the setting on the address below.
- and of course, you keep the possibility to get a 16-track recording of the whole

So, it’s just huge !!! To be even better would mean an additional ethernet/AES 50 interface to please the sound engineers equipped with a X32 so as to leave them something to do, or an ADAT in to add more tracks for I use all of its inputs.
View price information
Did you find this review helpful?yesno
Cookies help us improve performance, enhance user experience and deliver our services. By using our services, you agree to our use of cookies. Find out more.