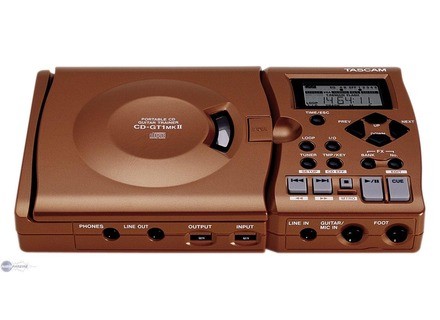 Tascam CD-GT1 MKII
5
This is a "guitar trainer"... it's basically a CD player that can slow down your CD's to play at lower speeds, thus making it easier to learn different guitar parts. It's got a lot of cool features. You can slow or speed the tempo of the track you are listening to by 50%. It also has key change options, up to six semitones. It seems to be miscategorized here, though, as it's not exactly a recorder.

This thing works really well overall. You can use it quite easily, it's easy to change tempos and keys. There's also a lot of playback options, like single and loop mode, you can also loop certain sections of the song if you want to focus strictly on those. You can even change the tempo of the song without changing the key, which is difficult to do in other programs, manually. There's also the option of plugging in your guitar, or a mic if you're so inclined, so that you can listen to yourself play along with the song. There's a 1/4" input for this as well as a volume control for the guitar. You can hook up a footswitch to this machine but I never bought one and don't know much about it.

The sound of this is going to depend mostly on outside factors like audio quality and the quality of your guitar signal. I recommend using an amp modeler of some type to allow you to compete with the tones you'll be hearing. In fact, if you want to avoid hearing the guitars, there's a "guitar canceller" on this piece of gear that will let you get rid of it so that all you hear is you.

I used this thing for many years when was into a lot of metal and progressive rock, and it certainly helped me learn a lot of those songs. While there are some software programs that do the same basic function as this device, it doesn't have nearly all the extra features, and they make the experience much better as they really let you feel like you are playing along with the band. That alone will give you the confidence you need to learn the song, as well as really allow you to know how well you are doing. Once my ear training reached the point where it was better, I didn't need it as much (I also started listening to music that's clearer, slower, and generally easier to figure out, so that helped too.). Overall, though, I'm glad I have it in case I do find myself needing it.

alanou's review (This content has been automatically translated from French)

Tascam CD-GT1 MKII
5
Congratulations for the TASCAM CD MKII GT
it reads all CDs. CD-R and CD-RW
Very good effects that can customize
easy job notice in FR
My only regret there is no single
you better have the alim.tascam
Rapt.Qual. 179 VERY GOOD