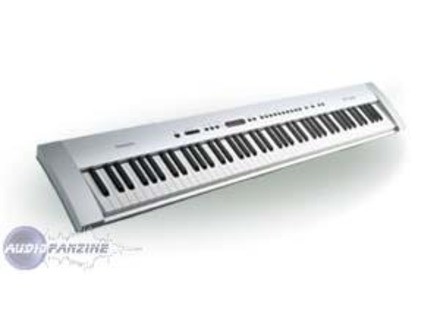 Technics SX-P50
5
It's a digital piano with 88 weighted keys
The samples are from a Steinway and it is easily recognizable and appreciated by the ear. Forget about the other sounds.

It has some very useful controls, like brilliance, reverb, the weight of the keyboard (light/mid/hard), and transposition (to work with one or more vocals).
You can obviously use it as a master keyboard.

This piano has been my faithful companion for 11 years.
Sounds are very realistic, they have shocked more than one. If you want to make yourself an idea, go to http://www.dogmazic.net/denisb
With hindsight, I am now able to understand where the defects of the sound lie. Sometimes it sounds a bit tight in the mids. But, to be honest, when I hear people say "the sound of the piano is not up to par"....Go play a $5000 upright piano, or a $13000 old Pleyel grand piano and then come back to the P50. The verdict won't surprise me. I'd understand that if you have $50,000 to buy a Yamaha C7 + the money to have it tuned twice a year + a room to go with it. Otherwise, it's only nitpicking! The P50 dwarfs lots of modern pianos and the only limit will be you and what you can do. The rest is called marketing or uneducated ears that have always played a piano on a synth. The "playability" of the P50 is excellent. I have tried to play it with VST piano sounds that are supposed to be marvelous, and there is simply no point of comparison. It's like a video game, it most be playable, and the P50 won't disappoint anybody at that: Velocity/sound/dynamics, keyboard...it's an excellent compromise, given its price.

I bought it in Los Angeles in 2001. It was the only one in the whole store that seduced my ear. I liked its slim design and accepted the fact that it had to be amplified. I played with headphones five years (worn-down Sennheiser HDP 25 that are 20 years old). I use it right now with active monitor speakers (Fostex PM), and it's very, very good.
What I miss the most is not being able to play synths, electric pianos and organs with decent sounds. That's the reason I changed it for a Nord (which is much more expensive). Even if at the end of the day many of us always come back to the grand piano sound, I think it's always positive to play alternatively piano and other instruments.
One last point: After ten years, it has no sign of fatigue, no feeble keys...no planned obsolescence??? Instead of selling it, I'll keep it!!
Did you find this review helpful?yesno
»

Technics SX-P50
4
88 keys, 64-voice polyphony, pleasant keyboard, nice action, although it won't please purists.
Usable sounds: The two first pianos, the rest are insignificant (2 EP, strings, voices, and some terrible organs). You can layer two sounds, but the polyphony is halved. So, it's no use.
Anyway, what I wanted was a piano sound.

You can change temperaments, it has three response curves, A brilliance control, and a reverb with 4 presets. A nice detail about the latter is that when you cut it, a string-resonance algorithm is activated and it's pretty well-achieved.

Connections: midi in and out, minimalist implementation, sustain pedal and external power supply plug. Two audio + 1 headphone output.
A midi thru would've been nice, as well as another headphones output.

Not too heavy (i can't recall the weight right now, but I can carry it easily by myself).

No wheel, minimalist midi, but it nevertheless serves me well as a master keyboard. In my home studio, it spares me from having to input the notes by hand in the sequencer, the rest I solve with some editing.
For rehearsals, I change sounds directly from the expander, and since I only play piano and jazz organ, or even some pads, I don't mind the lack of controls.

The keyboard is not tiring and it allows you to play fast. It may lack some sensitiveness at the fingertips, but given the price...!

The two piano sounds are really nice, especially once the reverb is cut off to activate the string resonance.
Nevertheless, a small multi-effects can surely do a better job than the built-in reverb.

I've had it for less than two months, but I like it. I do not plan to change it any time soon.
Did you find this review helpful?yesno
»

Technics SX-P50
5
Read the review by Didmo, who does a nice job summarizing the features.

The keyboard of this piano is, in my opinion, one of the most realistic, but it doesn't have double action, like a grand piano.

This is the reason why I chose this piano, the piano sounds are very good. The high frequencies are very well-defined and the lows very resonating, like on a real piano. The key springs remain firm and well-adjusted despite years of use. It always provides a good expressive attack, which I need for certain compositions.

The pedal in brushed metal is of high quality and very sturdy, the buttons are rugged. Ideal product for live, and it can withstand perfectly the perils of transportation. It was actually conceived to be transported.
I've had it for 3 years and I still use it intensively, it remains very faithful and has never given me any problems.
I don't regret having bought it.
Did you find this review helpful?yesno
»

Technics SX-P50
4
Hi!
The technics p 50 is very good for me live and in my home studio, but it's a pity its not splittable. The sounds are OK.

Nice keyboard, not very heavy for someone like me who plays synth!

2 good piano sounds, but I don't know about the others.
It's first and foremost a piano.

18 months with it and I've had no issues.
Did you find this review helpful?yesno
»