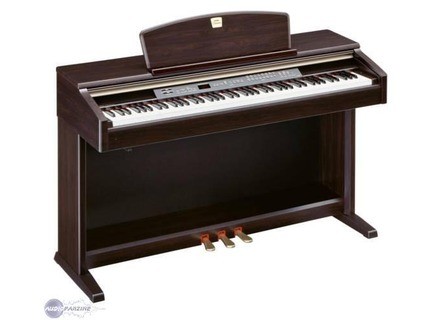 All user reviews for the Yamaha Clavinova CLP-130

Yamaha Clavinova CLP-130
5
Regarding the features, I filled the specs but I forgot to mention the inputs and outputs:
MIDI: In, Out, Thru
RCA Out, Jack In and Out
2 headphone outputs.

An advantage: Transposition of internal recordings or MIDI sequences with the TRANSPOSE key + up/down.

A rather satisfying number of (very) interesting sounds and variations. Comprehensive connections, which I use to sequence this piano with my MPC 500.

There's no sorcery. Nothing requires more than five buttons, except maybe accessing sequenced songs based on sounds, but I never use that.
The TWO headphone outputs are very well thought-out because they allow me to hear what I do/improve while I record on my PC.
Everything is written on the piano, the only difficulty (?) is that yous must learn how to read first. I have never read the manual and I even wonder if there's one, because I have never seen it =D
You can record two tracks that can be simultaneously played back at the same time you are playing! It's magical, isn't it? However, I strongly recommend a metronome, obviously! Because it's a recorder and not a sequencer, so you shouldn't complain.

I like the keyboard a lot but, not being a pianist, I find it hard to pronounce more categorically.

For techno producers like me, buying such a piano is a crazy idea because it's quite a sum for "only" 28 sounds.
But these 28 sounds are already enough for a piano of this category and they are Extremely POWERFUL sounds, Punchy and, especially, original. Even the sounds of the Korg T3 are nothing compare to these. The E.Piano 1 is gone, I don't find it ANYWHERE. However, I love to use it...

Effects aren't used with knobs and faders (except mellow/bright) but with push-buttons, which is nevertheless more than enough. Their quality is irreproachable. I particularly like the tremolo on the vibraphone, the GrandPiano2 and Guitar(steel).

I don't use the reverb.

Before making techno, I made ambient and industrial music. The sounds are unparalleled and powerful to the point that my ambient music came almost exclusively from this piano
I have now used my ambient recordings to make techno and it works PERFECTLY!! I can achieve really dynamic stuff when I mix them with drum machine loops I downloaded, all with the help of Audacity. With FL11, they sound very good as well.
I've been using this instrument for 4 years. If I ever had to, I would buy it again without hesitation.

Unbeatable value for money.
I cannot complain about the dimensions, since it isn't larger than an 88-key upright piano (although less tall), the connections are very well conceived, the recording quality is impeccable (on the piano and my PC). I give it 10/10.

An example of the strings and the e-bass:

Enjoy! I'm sorry I can't give you more examples for you to hear!
Did you find this review helpful?yesno

Yamaha Clavinova CLP-130
4
The features can be read in previous reviews.

The keyboard was quite all right at the time it came out and compared to competitor products. The ones on the most high-end CLP back then (the CLP 170), which was much more sophisticated, wasn't that much better. When you put yourself to serious things, like studying Chopin, the keyboard is not enough to really progress.
It's incredibly easy to use.

It doesn't have too many sounds. As a consequence, they are good and usable, generally speaking.
The relation between keyboard/sounds is satisfying. The polyphony is enough (when using a pedal, the notes that disappear due to overlapping aren't too noticeable).
The piano sounds are realistic.
The effect are...what they are: You need to like them and they can't be adjusted.
The piano is very useful, both for concert piano style or a piano bar. As usual, the church organ isn't what I was looking for and I keep asking myself what use are the harpsichords.

I had it for about a year until I decided I needed a true piano keyboard.
I tried the entire product range (clp 110, 120, 130, 150, and 170) before picking one. The sampling of the 110 is not enough, which disqualifies it right away. The amplification of the 110 and 120 isn't enough and they have a too mids-heavy sound, for my taste. The 150 has a more powerful sound and more sounds.. And even more so the 170. I chose the one that offered a good sound without useless options.
Compared to similar products, its value for money was unbeatable back then. However, all in all, it is expensive.
I would never buy this product again, first of all because the new Yamaha products are impressive, in terms of sound obviously and, especially, regarding the keyboard. On the other hand, right now I prefer a stage piano without any amps or speakers.
Did you find this review helpful?yesno

The keyboard is very nice and it can be adjusted (Hard, Medium, Soft).
It's easy to get started with and use it.

The grand piano is excellent, especially with the Hall option.
Organs are very good, acoustic guitars very good, bass is not bad, violins are decent.
You can hear the noises of the harpsichord's mechanism, the precision of the details.

Adjustable phaser, tremolo, chorus, delay effects adapted to the piano.
GH 88-key keyboard very similar to an acoustic piano, you can play with nuances.
(I have tested acoustic pianos whose keyboard was not as good or pleasant).

I've been using it for 8 months.
I love the grand piano with the echo and the hall effect, everything adjustable, obviously.
I have tested several Rolands but I found the keyboard very soft and too bouncy to my taste.
It's a great value for money, especially when you don't want to annoy the neighbors. It's very interesting secondhand.

If i had the same budget, I would buy it again ─ twice.
Did you find this review helpful?yesno
Cookies help us improve performance, enhance user experience and deliver our services. By using our services, you agree to our use of cookies. Find out more.