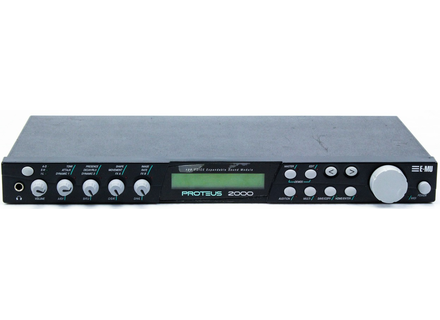 The basic setup is simple, using mostly left / right buttons and scroll wheel. It's a style.
I did not go very deep even though I have for a long time. The manual does not seem so useful menus are detailed.

The setting is uncomfortable but we feel that the input machine is capable of anything (with the patience to adjust effect parameters 12). The tears in his style fat synthesis. I mean, that pianos are ridiculous example.

I use it occasionally for some years. I love her inimitable warm and fat sound but I really regret its setting in the old. Ultimately, its a killer on a machine not practical to use.

10 of 16 people found this review helpful

dogfacedgremelin's review (This content has been automatically translated from French)" It's heavy (the EMU What!)"

E-MU Proteus 2000
5
Expander that provides variation of its instruments has the infinite.
Controllable via midi and has memories of scenes. two midi channels (2 * 16) 6 audio output and digital.
They just add their own instruments / Samples modules in Flash (so hard to find)

Simple, robust machine (Apart from the Data wheel capricious but as the beast is controllable via midi ... well we are in).
For his edition of it is infinite and it is EMU Gros BIG SOUND!

Very good sounds that fit more than one style of music.
C'st Gros Its the American way, a slew of effects and filters.
"Like" this bike like crazy (it replaced the gear).

I have several boxes to test the sound, but it's one of my favorites.
In secondhand is that of happiness.
A good remake yes without hesitation

13 of 15 people found this review helpful

Almanyak's review (This content has been automatically translated from French)

E-MU Proteus 2000
5
I went to good starts because I see that there are not many people at the gate.

When I heard the sound ca Emu was the real slap!
My ear has radically mutated. Since the force-fed synth effects as a cache misery or eternal banks GM coated so that we refile Roland. It's good!
It is on there is always better. But as much versatility and character, I say frankly hat.

The config is pretty well fucked I think.
This is my first Emu, I am not a math student, yet I never lost.
If you want to edit the sound with layers and everything ... Not the good I say.
But there are already enough to do with the 32 MB that modulate the sheet has already
The screen would have deserved a little more room on it. I put 8 to ca.
I believe that there is a PC editor ... cf Forum

I find it sounds very musical as a whole.
Again it is on, not all!
But brands that you meet a 100% you know you lot?
Even though I have not the leaves of a sound engineer, to be honest it holds the road very well, and even more widely.
With 3 free slots can expand its range of sounds at a reasonable cost when a single 1U rack like the ROM can be inflated up to 128 MB!
What not see it coming?

It's been a little less than a year since I have, and unfortunately did not have time to use it further. I play regularly and is a constant pleasure. I tried a lot of other racks / brands. The one most closely matches what I was looking, bass, pianos, synths, drums, everything! I've still added VINTAGE cards and PHATT, and it is not tomorrow that I part with it. I paid 370 Eur Standard version, with the deal. A piece 130/160Eur these additional ROMS are a great help in the style that we approach. But even alone it is an excellent general strongly featured.
Signed in Emu, and for a long time!
And that's without regret!

urbanstudio's review (This content has been automatically translated from French)

Navigation is simple.
We quickly found the sound that one seeks.
I never opened the manual.
There is no SPDIF input impossible to enslave its digital channel is a real shame ..

Trs sound electro / Soul
Ideal for Hip-hop prods / Rn'B
If you are looking for acoustic sounds ralistes go your way ...
on the other hand regarding electro synth / rhodes / Klav / Analog bass ....
it is a marvel especially in relation to its rating OCCAZ!
And it ensures quality of EMU.

I use it for 4 years. I had it bought for the scene as gneraliste expander .... blah blah ... too typical!
He finished in the studio on all the time that I miss the sound of a keyboard on a prod Hip-Hop/Rn 'b and electronica, it gives me.
With the experience I remake that choice without hsiter!

Did you find this review helpful?yesno
»
Read the 6 user reviews on the E-MU Proteus 2000 »

E-MU Proteus 2000 manuals and other files