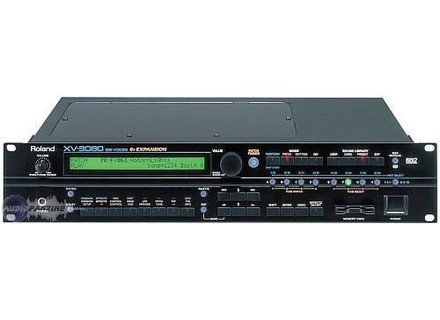 All user reviews for the Roland XV-3080

Average Score:4.7( 4.7/5 based on 6 reviews )
Value For Money : Excellent
Not satisfied with those reviews?
Our members also liked:

Roland XV-3080
4
I am satisfied with the features. I wouldnt mind having more MIDI ports though (only 16)

Well the screen is small and I find the menus confusing. The manual is very well made so it helps though.

Excellent for bread and butter sounds (pianos, basses, leads, pads..) The drums are good too. I am a fan of orchestral sounds and I think I'll have to spend some more $ to get extensions for those. The basic ones are good but not outstanding. Excellent module though, dont get me wrong!

Seems good. Never had a problem.

I almost love it

Originally posted on FutureProducers.com
Posted by: Unknown ( 3-, 2002)
Did you find this review helpful?yesno

Dead easy to use.

Never gigged with it, never had any problems.

Amazing. If you're into Pop/R&B, Roland is your manufacturer. You'll know 200 of the 1000+ patches easily. The new reverb unit is tops, makes the pianos and strings that much more usable. One thing Roland always did the best was make soudns that just sit in a mix perfect w/o tweaking.

If I lost it, I'd buy a 5080 probably, only because the 3080 is out of production. this is my primary sound module for all my hiphop/r&b/poppy tracks. If you add in all 6 boards, + all soundbanks on the memory card, you can probably have 4000+ sounds on this badboy at your beckoned call. Can't beat that

Originally posted on FutureProducers.com
Posted by: Unknown ( 5-, 2003)
Did you find this review helpful?yesno

Roland XV-3080
5
I was looking for a Roland expander can replace my D-110 a bit outdated. The integra seems very tempting but unfortunately a bit expensive for my current budget. So I cracked on a XV-3080 occasion.

To select the first sound that is consistent with the use of Roland but I'm in the learning phase of the expander and I have yet to test the change patches.

OUi, certain sounds are well known, others are sometimes better but on the other hand my current set is exactly what I wanted. A summary of the best Roland sounds in all styles and much better than the D110 and even the juno-g keyboard as I use to do all the streets. I also have a D-50 and Korg Wavestation not come duplicates the XV-3080. I also think the sound is more punchy in my configuration with ample sound and a very nice stereo.

Brand new (one day). I think all the right sounds Roland I was looking in an expander with the possibility to extend further by SRX and SR-JV cards.

Roland XV-3080
5
I just wanted to add from what has been written about this unit that there was a sound editor software for devices Roland XV series with XV-3080.
This is the XV-Edit PRO for XV-3080 on the site SoundTower.

Given the number of sounds in memory is not a luxury.
So you can make backups of patches and performance on the PC hard drive, which is more in case of problems with the expander.

The use of the XV-3080 takes some time to begin to control it. Besides, how do we know that in making the most?

The sounds are very good. But it is a matter of taste. Have in its list of machines with a Roland, Korg and Yamaha one can scan a range of unique sounds.

Let's say for the Roland XV-3080 is a seriously compromised due to expansion cards that can give him. I found the best sounds in these cards, not in sound factory.

Excellent value for money.
Do not hesitate, if you are looking for an expander opportunities for a good start in the world of home studio, you have found.

Darkmagnus's review (This content has been automatically translated from French)

The screen is not very large but the gene does not really. Access to the Cutoff and Resonance ... etc ... Really better than on a xv2020.
on the other hand I do not understand how to change the tempo of the loops (on the map House)! then I despair when Triton is a super simple but it is good to study.

There is carément well. On top of guitars, drums realistic, warm bass (yet very usual for these digital devices)
The effects are great too. Sometimes I make only titles with xv effect included (I put audio in cubase to avoid overloading the afternoon)

A great alternative Bécanne and especially between the xv2020 (too small and sounds catastrophic edition) and 5080 still expensive. There is room for 2 and 4 SRX SRJV ... what do evolve and thus keep it long.

Tac's review (This content has been automatically translated from French)

Roland XV-3080
5
The expander rack is double, produce impressive faade. From memory I 7banques of about 128 sounds, finally sounds it's not what's missing, there is something for everyone, classic rock jazz Funck hard techno etc ... 64effets diffrent in addition to base effects. distortion, flanger, compression, multiple 3D effects etc. .... sounds are ditables, but it's not Roland who has been the effort .. "" "Xv edit it with pro http://www.soundtower.com/xvedit/" ""
Correction 17/11/02: roland makes available a free editor
https://www.rolandus.com/support/genappstools/index.asp?CatID=8&SubCatID=37&ProdID=XV-3080
We can put four cards of the series and 2 card SRJV new generation of Roland SRX.
Each sound can be done with 8 samples is What Makes the polyphony is 128 voices

The XV3080 is easy to use, it can mmoriser prfrs its sounds, the only inconvniant is that it does not show the tracks jous when sending notes via MIDI , so when you send notes on the guitar track for example, and many o you need to know is the guitar in the XV, but from everything else is very well done.

The sounds are trsralistes my prfrs: the sounds of acoustic guitar allucinant, when I make a cd cost friends, they do not believe that it is made with synthetic .
At the touch sound can be trs diffrent according VLOC (diffrent sample in the same sound), Roland has hit certain sound in 4 DIFFERENT sounds according to the jou force. eg a snare drum sounds can possder 4 DIFFERENT according VLOC ralistes and even more than the sounds of the JV SERIES. I myself even a dj JV80 who had struck and with the XV3080 is trs complmentaires sries in all sounds.
Question effects there is nothing to say except that we can used one of 64 effects a time, plus a reverb and chorus standart, but I do not believe that To date there are multiple simultaneous effect expander may be ending for ....
I work a lot with the acoustic and I'm not at all deu.

I have this module from The beginning of 2002, there is sound I do not like, but it's only a matter of musical taste, especially I do not use techno sounds, instrument or copper are also well done and Varis trs.
I went around to the competitors, but in relation qualitprix is ​​what suited me most. I can find additional modules tehno too, or at least not enough acoustic, or modules interresting but 2 times the price of XV.
A costs absolutely on this synth: Accoustics guitars and electrics! thundering
Trs I am happy with my purchase, but do not hsits before you buy, ask the seller a headphone and stay four or five o'clock in the store (that's what I did! !)