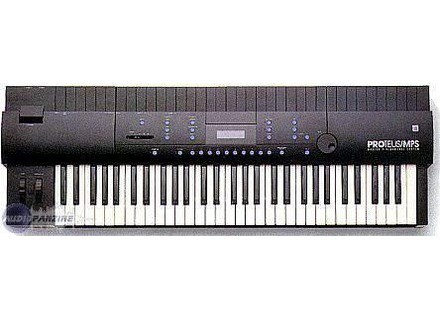 All user reviews for the E-MU Proteus MPS

hhw's review (This content has been automatically translated from French)

E-MU Proteus MPS
4
Despite the years that pass this synth is still valid ...

Magnifiques.je can not do without the oboe even despite my virtual samplers.

Perhaps a bit fragile ... I had problems gnral volume that could not be more rpar and today is the part that makes me twelve o'clock faux-bond. ..

Deul's review (This content has been automatically translated from French)

I mean the version that MPS + Orchestral sounds possde 16MB instead of 8MB.

This keyboard is exceptional use, despite his ridiculous catch everything is intuitive.
Each sound can be said, it is surprising even for a keypad of this era to have as many opportunities.
For several years I have used this keyboard as my master set (Korg Trinity + Sampler EMU) in concert.
True happiness, it is assignable buttons just above the buttons: One click, and all the gear is set up instantly. I never found a keyboard that facilitates both live life.

That's when the EMU, sound Rican truth.
We can not talk about ism, but nobody is on the same (Genus Korg M1 we have all heard again and again) ...
slap really is powerful, and the effects are remarkable.

Alan Replica's review (This content has been automatically translated from French)

E-MU Proteus MPS
5
Connect to none worthy of the EMU era keyboards, keyboard matre excellent (if not looking for a heavy touch). CONTRL sold for the era the Proteus.

CONNECTIVITY a unique allowing management of two chains through the MC500 Midi sync and analog synths and modules via output send / return. Sounds from the EIII, reworked by the effects of numriques poustouflants ism. The sounds of drums, violins and choirs tablecloths, acoustic piano are gorgeous. must rest on the electric guitar sound with distortion ... This is why I purchased second-hand, APRS m'tre spar in my group for artistic 'solo'.
The only obstacle is the relatively limited number of sounds and backup / restore to make new CRER.

1997. Because I was looking for a guitar sound prcis (~ Gibson Les Paul Custom + compression + distortion / fuzz). This instrument has since become the 'tower CONTRL' of my set and the sound module raliste such as drums, bass, guitar, piano, backing vocals ...
Shame about the limited number of sounds ... The card reader is not really solid, and the solution of sound cards not take homeowners.