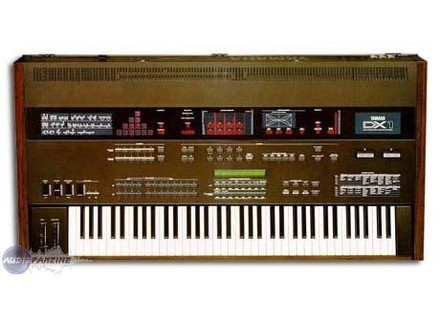 DX1, Digital Synth from Yamaha in the DX series.

View other reviews for this product:
The Yamaha DX1 was a very expensive keyboard when it first came out a long time ago. It was used by many popular bands of the 80’s and even into the 90’s. Today its value is not what it was at that time but it can still be used to make some really cool vintage sounds. The downside of this keyboard is that it is huge. There is just not space for it anywhere, I do not know the exact measurements of it but I can say it is probably the biggest that I have ever had.

The sounds are mainly based from FM synthesis, and it is very similar to the sounds of the DX7 but the DX1 has better overall quality. There are 73 keys on this board and they are touch and velocity sensitive. It does have MIDI connections which I think is fascinating considering that this keyboard came out such a long time ago.

The DX1 is a 32 voice polyphony keyboard that has 64 presets, and all of which will pretty much take you back to the 80’s. None of these sounds can really be used in modern music unless you put it throw a bunch of processors and racks to bring it up to date. But if your style is electro music, then this will sound great for you. You will be able to plug these sounds right into your music and it will fit right in.

The DX1 is well made, and when it first came out it cost so much money that the average musicians could not afford it. So the only people that used it were established bands and musicians. The sound is nice and fat plus the keyboard itself looks great with a wood grain trim around the bottom half of it. It will be hard for most people to get their hands on this keyboard now because it still cost a good amount of money and most people are collecting them and not selling them.
Did you find this review helpful?yesno