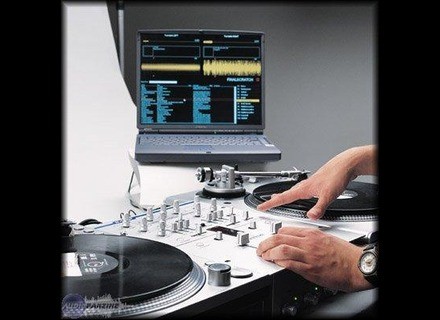 tsunami Wazahari's review (This content has been automatically translated from French)

Stanton Magnetics Final Scratch 1.5
5
A week ago that I have my Final Scratch, beginning very difficult!
The system is composed of a soft, a USB interface box, and two encoded vinyl and all it works as a special linux, he first had to install! (Sniff)
Already started the trouble! A boot cd, menu, application installation and hop ... neither seen nor known, the system will delete the partition because it had to know: Microsoft owns u doonc NTFS and Linux only supports FAT32 so linux has put it all ca sauce!
Finally j shorten the rest of the battle that has all the same length and several formatting 2 days!
Finally, once installed, a true marvel, the mix on stage control so ultra mega realistic MP3! I is not believe my ears!
Interface still very brief but to gain performance!
I is thus a 9 / 10 because of the installation and interface decofrage just gross!

ganesha's review (This content has been automatically translated from French)

Stanton Magnetics Final Scratch 1.5
5
Since even the cdj 1000 mk2 did not reach the ankle, finished spending the tune cut dubplates since it is you who shall decide the sound put on your pancakes, thanks to the final scratch!
Version 2 is more galre t it seems that the 1st version that is stable! I suggest you keep your files in mp3 192 kbps for a quality close to the vinyl.
writ has been a year since I work on it, and set apart from the connections that require about 10 minutes (as many do so quietly) the interface is not superfluous as nickel effects, the case is easily transortable, good short in s' get used to used to it.
report quality price is worth it's an investment for the price of a cake at a record store!

dj skredy's review (This content has been automatically translated from French)

Stanton Magnetics Final Scratch 1.5
5
Pocesseur happy for over a year
so for me it was like for you linux instalation
then it does not always work even on Linux it can walk panda 1 week without problem and after nothing, not the more lancer.de stanton not find a better put us on-line help in English, but (personally I speak English ) long live the manul j galere.pour not even talk about it.

My pc is a p4 3 ghz with 1 gig of ddr ram 140 GB of your HD.
has since version 1.5 everything works perfectly I am happy.
so with this configuration everything is stable.

J FinalScratch for over a year.
what I like best is to mix c with the wafers mp3 encoded (c is the feet) and then they win because of the place with all those j vinyl bins aver more room in my house.
what I like least is the sound of the c mp3 Defois that are a bit crappy (which sounds are distorted or)
Revenge not on when I have the buying was nothing other than AC (final scratch 1.0)
when I bought it I found it lay not very expensive 700 euros because of the economies that it would make me.
experiance I would do with this choice despite the initial difficulties which are still quickly forgotten.
here I wish you all a very long hour mix of FinalScratch