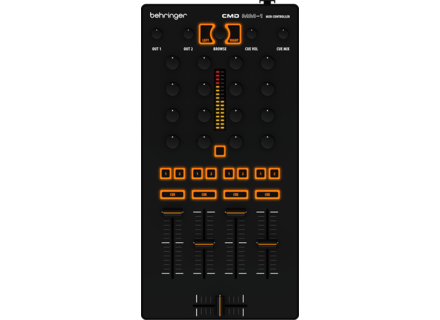 Tof012004's review (This content has been automatically translated from French)

Behringer CMD MM-1
4
Plug and play, no drivers to install. All plastic, but relatively tough and pretty anyway.
I used it maybe a year fairly regularly, at home or in the evening. Knobs and faders are of adequate quality and look to take time, maybe a little soft for having a really nice touch. Always in touch, the buttons are rubber knobs, pleasant enough, if somewhat smaller in diameter if you want to quibble. From memory, there is a "center detent" a notch in the middle of the race in order to feel zeroing the knob (other controllers such as the VCM600 do not have that and frankly it lacks). But for the price, and the scarcity of controllers that replicate the config of a mixer, no complaints! To summarize, we must not forget that this is not a midi controller and a mixer to use.
The thing that does not fit into the time is screen printing around the faders.

With regard to potential problems (and possible solutions

)
* Communicates on MIDI channel 5 (maybe channel 1 for the first series produced). This can not be changed, and can cause problems to use several on the same computer. Apparently there would be a chance to get an answer by asking a firmware with another port twelve o'clock directly from Behringer, from what I've read on forums.
In Traktor, it's not a problem because the controller is recognized by the USB port it is connected (it is not necessarily useful to have 2 in traktor, but in any case it is possible!). In Live, it requires establishing a control surface by CMD, and find or write the script that suits their needs. Or circumvent the problem by installing another middleware type yoke twelve o'clock.
* Another concern config, the buttons only send Note On (or CC I do not remember but the problem is the same) between 0 and 1, not from 0 to 127. This is not a problem in Traktor, but it is a problem in Live and forced to go through a remote script to use them, or even once a midi software such gig that translates MIDI messages.
* Config last concern, the two top buttons are always lit, no way to control the LED by noon.
* Lack for me, a meter per would have been welcome. It is in the process but it is a little less comfort.
* Do not walk that plugged in. At installation it is always time and cablasse more. By organizing themselves against a little, with the integrated hub this problem could become an advantage. Probably only a little fiddling in (goodbye warranty), there can be powered directly by the USB controller sacrificing the hub.

To summarize, great controller for the price, and also because there are few other controllers that resemble a mixer at affordable prices. It is not perfect, but his problems are bearable or circumvented.

Behringer CMD MM-1
4
How long have you use it?

I love:
Mixer 100% MIDI no frills but well thought
Fully assignable, so we map the way you want
Integrates a USB hub
Elegant look but nice
Compact
Concept of modular controller sliced ​​(I think it's great)
Tie with knobs and faders like Chroma Caps (100% compatible, it gives a sexy look)
Overall good feeling in use, it is arranged, responsive and the handling is immediate
4 knobs by voice, so can map it to a 4-band EQ, Gain and EQ 3 +, or 3 + 1 EQ filter like most good mixers of the moment (or even any other combination according the software used)

I love the month:
Entries silkscreened fade quickly around fader once you rub with your fingers too. It's not dramatic, but it's a shame.
Both knobs and faders have a good feeling, as the buttons are a little "crazy". Rigid plastics not super nice to the touch and squeaky or "crack" when squeezed. Another time not annoying, but it gives a feel for the use of the product first prize.
Absolutely requires a power supply (to power the USB hub a priori), while all other controllers in the range can be self-powered. Shame especially for mobile configs.


Have you tried many other models before buying it?

How would you rate the quality / price? With experience, you do again this choice? ...

Excellent price / quality ratio, very accessible, and the big plus is modularity.
At this price I redo the choice again!

julien-dask's review (This content has been automatically translated from French)" great value for money, I recommend"

Feature I like most:
were leaving the potentiometer allows me to simulate an EQ 4 levels internally mixed with traktor as the xone 92.
Buttons, knobs and faders respond well to a controller in this price range.
I also like the central line of LED affect the master which allows for visual feedback of the overall volume directly on the controller

Feature I like least:
The paint tends to fade very quickly along the fader, or even completely hyper and quickly. This has no impact on usage.

I tried a lot of midi controller and that corresponded perfectly to the need to emulate the EQ level 4 as a xone 92.

How would you rate the quality / price? With experience, you do again this choice?

For value for money this is perfect, I do it again this choice without hesitation even though I do not expect a significant period of life for this controller in intensive use.


Small grants and cautious expenditure: Go for it!

NiT's review (This content has been automatically translated from French)" Very good controller. Berhinger thank you!"

Behringer CMD MM-1
4
I use it for only 3 days but I must say I am more than satisfied with my purchase. I was expecting a review before I bought it but could not wait ...
My opinion is very limited in the sense that I use it as a simple controller with Ableton Live and not with a DJ software as it was intended.

I took it to the number of tests it offers, namely:
-20 + 1 potentiometers endless
-4 Faders
-1 Crossfader
-15 Buttons (on / off)
All are assignable in Live. It is recognized without any driver to load on.
It will still activate in pref.

The case is plastic and the front is covered with a metal plate: it is light but it seems really solid.
All buttons are very good qualities. I think he'll take a long time, not like my Korg nanoKONTROL.
The touch is nice, the knobs are hard and covered with a super soft rubber! The knob has endless against a super fine adjustment: not to use a control from 0 to 127 as it should do 100 laps!
Faders and crossfader are like a good mixer. The cross offers less resistance, perfect for scratching.
The buttons are a bit hard but it is not annoying. on the other hand they are always lit in orange and the coup was not a reference to know if they are activated or not :-(
I saw on the videos they could turn blue but it can only be with the DJ software, at least I have not found how to live (the same time I have not read manual)
The Hub is a great idea and works really well for what we want to, so I no longer use that I put on my laptop.

Quality Level, Behringer has really improved. I think I have more confidence in their future purchases.
I put only eight, because I have not tested in time DJ and buttons, it's still annoying not knowing if an effect is activated.
This is a good quality / price ratio, I would do this choice without hesitation.

Published on 01/28/13
Behringer announced at NAMM the release of the CMD DJ Controllers, which will ship with the Deckadance DJ software.